Inside the Shoebury 'sex ring' investigation

A little over a month ago, Essex Police made an announcement which prompted a news firestorm. Chief Constable Stephen Kavanagh and Police Commissioner Nick Alston issued a joint statement announcing a formal review of the force's investigations into alleged child abuse in the late 1980s and early 1990s. The review was launched after three whistleblowers met with senior police officers and detailed a catalogue of alleged failures by Essex Police and other local bodies.

The story immediately went national, picked up by outlets including the MailOnline, ITV and BBC, which also ran a 12-minute news package on its Essex radio station. But, as the BBC acknowledged, the review had been prompted by a year-long investigation by another media outlet - regional newspaper the Yellow Advertiser. The paper's work made headlines in the trade press, covered by HoldTheFrontPage and Press Gazette, which later ran a second piece on the 'mighty' Yellow Advertiser's 'dogged investigative journalism'. Mr Alston thanked the Yellow Advertiser for its key role in prompting the review. I was the reporter behind that Yellow Advertiser investigation and am continuing to run it weeks after the wider media seems to have forgotten about the whole affair.

In late 2014, I was browsing Essex Council's Freedom of Information webpage, where it publishes information in response to requests from the press and public. The database of recent releases is often overwhelmed by residents demanding details of pothole repairs and the council's part-night lighting scheme, but occasionally you stumble across a gem, such as that the council spent £30,000 trying to recover £50,000 in expenses which turned out to have been legitimately claimed, or that a child was paid £15,000 compensation after a school worker threw a DVD at their head, or that teachers who had sexual abuse complaints upheld against them were never reported to police.

In late 2014 I opened up what looked to be a fairly mundane spreadsheet - a member of the public had requested the release of some data from County Hall's accounts. What I found set in motion a chain of events which culminated in last month's announcement by Essex Police.

Sifting through a list of 600 compensation pay-outs, I came across one made for 'alleged abuse'. Then another one. Then another one. In total, I found 10 pay-outs in 2014 alone for abuse alleged to have occurred on Essex Council's watch in the 1970s and 1990s, nine of them relating to children's social care departments.

I immediately compiled a list of questions for Essex Council to answer in relation to each of the 10 cases. For each one, I requested details such as the gender of the complainant, their age at the time, whether they were in care, when the abuse had first been reported to County Hall, whether County Hall had alerted police, whether anybody had been charged and whether anybody had been convicted. The council's press office refused to answer the questions and forced me to submit them as a Freedom of Information request. On Christmas Eve 2014, I received an email from Essex Council's Freedom of Information department, saying it had refused to answer any of the questions because doing so could identify the victims - a plainly meritless claim.

To check I was on solid ground, I ran the dispute by child abuse charity NAPAC - the National Association for People Abused in Childhood - whose chief aim is to protect and embolden child abuse victims. Its founder Peter Saunders confirmed that as far as NAPAC was concerned, the information the Yellow Advertiser was asking for clearly did not present any threat to the anonymity of the complainants and, he continued, Essex Council's behaviour was 'tantamount to a cover-up'. NAPAC and the Taxpayers' Alliance joined our campaign to uncover the details, which we ran as our first news front of 2015. 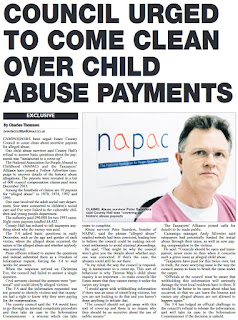 That week, I spotted that since I had started asking questions about the 'alleged abuse' pay-outs in late 2014, a member of the public had filed a Freedom of Information request for some Essex Council accounts data which would have included those same 10 compensation claims. Wondering whether the council's response to that resident might contain further details, I downloaded the spreadsheet. I discovered it actually contained fewer details; there was no longer any mention of 'alleged abuse' anywhere in the compensation listings.

By matching up the figures, I could see the 'alleged abuse' pay-outs had been reclassified in the fresh release as 'personal injury' settlements, making them indistinguishable from people who had received money for cut fingers or back injuries. That became a second front page story. 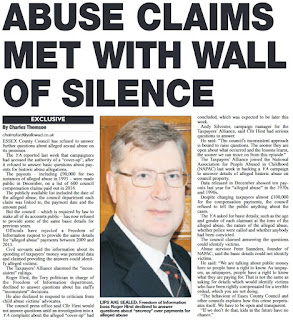 Following our second report mentioning 'alleged abuse' at County Hall, a man walked into the Yellow Advertiser's office and asked to see me. His name was Robin Jamieson. Robin was a retired NHS manager - the former district psychologist for Southend - and he had some information on historic abuse in Essex that he thought I might be interested in.

Robin's information was of enormous public interest value but without corroboration there was little we could do with it. Essex Council's lack of transparency thus far made it highly unlikely, in my opinion, that it would cooperate unless circumstances dictated it had little choice.

We had to wait almost six months but in June those circumstances arose. Robin was invited to a 'whistleblowers event' in a committee room at the Houses of Parliament, organised by child abuse pressure group the WhiteFlowers Campaign. At the event, in front of an audience of MPs, barristers and campaigners, he gave a speech detailing a raft of alleged failures by police and Social Services to properly tackle child abuse in Essex in the 1980s and 1990s.

We sent a copy of Robin's speech to Essex Council's press office and alerted the authority that we would be running a story about it the following week. In actuality, this would have been near impossible without the qualified privilege that a response from County Hall would provide; if they had replied 'no comment', the story would have been effectively scuppered.

But our gamble paid off. The press office responded with a lengthy statement which admitted knowledge of 'some historical child abuse concerns in relation to individual members of staff employed by Essex County Council in the 1980s and early 1990s'. The revelation resulted in another front page story. 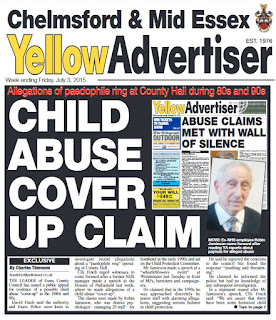 We forwarded the council's statement to Essex Police Commissioner Nick Alston and asked him whether he would ask officers to investigate. Describing the allegations as 'disturbing', he promised any alleged victims who contacted his force would be taken seriously. That became a further front page. 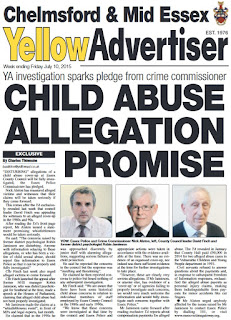 After securing this promise, the we continued working on the story behind the scenes. Acting as a go-between, we assisted in the early stages of arranging a meeting between Nick Alston and Robin Jamieson, then remained in touch with both parties as they began communicating directly. Mr Alston was so impressed by Robin's 'eminent credibility' at their meeting that he arranged a second, with the Chief Constable and a senior child abuse officer present. Two new whistleblowers, who had contacted Robin after the summer stories, were also invited. That meeting happened in early 2016, following which, a decision was made to launch a review.

By maintaining communication with Robin, Mr Alston's office and one of the two new whistleblowers - Rob West, a former charity worker turned probation officer - we learned that the focal point of the review would be an investigation into an alleged 'sex ring' which had targeted 'adolescent boys' in Shoebury in the late 1980s. Police had arrested two men - Dennis King and Brian Tanner - in 1989 and each had pleaded guilty and served jail time for child sex offences in 1990.

At their meeting in early 2016, Robin, Rob and the third whistleblower - former child abuse charity worker Jenny Grinstead - had told Mr Alston and Chief Constable Kavanagh that a number of boys who were known victims of King and Tanner had reported abuse by far more men.

Moreover, police had failed to interview a number of other boys who disclosed abuse by the ring to local charities, and even those who were interviewed had mostly not received any of the appropriate aftercare, such as counselling.

A number of the boys, with whom Rob had stayed in touch into their adulthoods, had since died of suicides and drug overdoses, while others were in prison or homeless. Many of the three whistleblowers' claims were supported by contemporaneous paperwork, including a report penned in 1990, which stated the 'active paedophile sex ring' may have had as many as 80 victims.

It took police several weeks to make arrangements with abuse helplines to field calls from anybody who came forward after the review was announced. With the helplines confirmed, the morning of March 8 was earmarked for the announcement. On March 7, deputy editor Steve Neale and I conducted an hour-long interview with Mr Alston. At just past midnight on March 8, we broke the story online. That week, we ran it across pages one, three, four and five of the paper. 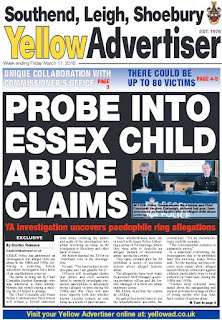 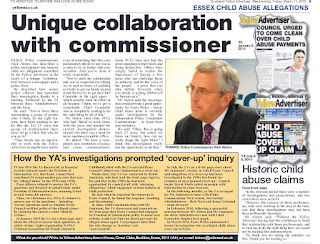 The initial wider media interest has since dissipated but we continue to run weekly updates and revelations, including details of the 1990 report into the 'sex ring' and the original convictions, the emergence of a fourth whistleblower, tracked down by the Yellow Advertiser, and the fact that evidence and court records from the original prosecutions appear to be missing. We have plenty more ready to go and, with Essex Police's and our own investigations ongoing, this is a story which will run and run.

As for why we continue to pursue this issue when the wider interest has apparently fizzled out, this quote from Nick Alston probably sums it up quite well. During our March 7 interview, he told us: "Many of [the alleged victims] have gone on to have very troubled lives, and that, for me, is one of the great sadnesses in all of this - if there was a missed opportunity to provide safeguarding which might have helped. So there is an opportunity here to see whether any of those people are perhaps prepared to engage again, if not with police then a professional agency, to see whether there's anything, even at this stage, which can be done to help them."

Anybody with information can dial 101 and ask for the Essex Police Child Abuse Investigation Team.

Alternatively, call one of these specialist helplines: