‘Thriller’. ‘I Want You Back’. ‘Bad’. ‘Beat It’. ‘Wanna Be Startin’ Somethin’. ‘Can You Feel It’. Six of the most instantly recognisable and universally loved tracks in pop history. Last night’s Jazz Cafe salute to Michael Jackson – the first of two shows designed to celebrate what would have been King of Pop’s 51st birthday – opened with an instrumental medley of all six. The message was clear; who but Michael Jackson could afford to squeeze six hits into a five minute medley, and still have enough left over to fill a two hour show?

Hosted by Eric Roberson and arranged by Nick Cohen, the night was a musical journey through the career of a pop legend, featuring tracks from his childhood all the way up to his final studio album, ‘Invincible’. Between Eric Roberson’s performances, vocalists Chris Ballin, Donna Gardier, Lennox Cameron, Grammy-nominated diva Kym Mazelle and Foreign Exchange’s Phonte Coleman took turns fronting the band.

Roberson kicked off the vocal performances with an energetic rendition of his favourite Jackson track, ‘PYT’, and moved smoothly into a delicate take on ‘Human Nature’. However, his best performance of the night was a sultry, sensual, extended version of ‘Lady In My Life’.

After Chris Ballin – a former Jackson backing singer – offered up a jazzy take on ‘I Can’t Help It’, Donna Gardier delivered a gutsy performance of ‘Never Can Say Goodbye’, littered with James Brown style false stops and reprises.

Kym Mazelle’s reggae inspired performance of ‘The Way You Make Me Feel’ at first threw the audience but eventually won them over. Mazelle would later belt out a funky reimagining of Jackson’s 2001 hit ‘You Rock My World’, which easily eclipsed the studio recording.

Dreadlocked keyboardist Lennox Cameron elicited screams from female spectators with his pitch perfect vocal on ‘Don’t Stop ‘Til You Get Enough’ and later reduced several onlookers to tears when he crooned ‘Gone Too Soon’, accompanied only by Alex Bennett on keys.

Frank Tontoh delivered a knockout drum solo during an arrangement of Jackson’s 1992 hit ‘Remember The Time’ that had more bottom and funk than the original track. Credit must also go to Tim Canfield for seamlessly weaving a rousing guitar solo into the R&B classic, ‘Rock with You’.

The biggest cheers of the night, though, were reserved for Phonte Coleman, who took to the stage decked out in a t-shirt bearing the slogan, ‘My hero ain’t molest them bitch ass kids’ – a slogan that the audience enthusiastically chanted at various intervals throughout the rest of the show. Coleman’s comical take on Jackson’s Motown 25 performance of ‘Billie Jean’, including a specially written rap, provoked a deafening reaction.

There may have been a shortage of tracks from the last twenty years of Jackson’s career, and every performer fluffed a few lyrics, but the night served as a poignant reminder of the talent that we have all lost.

For two hours Roberson and co wowed the sell-out crowd with hit after hit, but such is the enormity of Jackson's back catalogue that the crowd was still left crying for the countless hits that didn't make the setlist; 'Dirty Diana', 'Smooth Criminal', 'Another Part of Me', 'Dangerous' - and earlier hits such as 'Ben', 'ABC' and 'The Love You Save'.

The Jazz Cafe’s salute to Michael Jackson epitomised his appeal and served as a sad reminder of why the star was able to sell almost a million tickets in one city; his catalogue of hits could easily fill four hours and nothing can beat the experience of hearing them performed live.
Posted by Charles Thomson at 15:34

My contribution to No.1 bestseller, 'Michael Jackson - Life of a Legend'

During my hiatus from the blog, 'Headline' published the wonderful 'Michael Jackson - Life of a Legend' - a vibrant ode to the King of Pop. 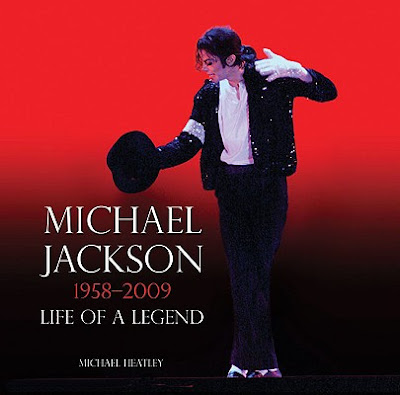 In late June I was contacted by 'Headline' to contribute a half-page condolence to Michael Jackson, which I dutifully did.

Upon release, the book became an immediate bestseller all over the world and has topped the British book chart for three consecutive weeks.

Turn to page 177 to read my tribute to Michael Jackson.

As I reported over a month ago, Ian Halperin has released a string of fictional stories about Michael Jackson since late 2008 in an attempt to promote his book 'Unmasked: The Final Years of Michael Jackson'.

Halperin's stories have included allegations that the star was dying from a genetic lung disease, that he was so broke he had to perform on the yacht of a Russian billionaire and that the star was only scheduled to perform for 13 minutes per show during his residency at London's O2 arena.

As yet, there is no indication that Jackson's autopsy found any evidence of terminal or life threatening lung disease. The story about Jackson performing on the billionaire's yacht was denied by those involved. Now Jackson's leaked contract with AEG will put paid to Halperin's claims that Jackson was to perform for only 13 minutes per night in London.

The contract states that Jackson was to deliver a 'first class performance' of 'no less than 80 minutes at each show'.

Oops.
Posted by Charles Thomson at 01:09

Catching Up; Apologies for my absence and welcoming my brand new website

Apologies for the prolonged absence.

Shortly after posting my last entry I jetted away to Cyprus for a spot of relaxation and scuba diving. I returned in mid-August and have since been swamped in research.

I have also spent some time getting my new website polished and uploaded - a task I kept putting off because I imagined that it would be an enormous hassle, but which actually proved quite simple.

For a professional biog, portfolio of work and contact details, you can now visit www.charles-thomson.net

I realise that I never got around to writing my blog on Jacques Peretti, but it seems pointless given that it is so long now since his documentary was screened.

In time, I will get around to explaining what the blog has been so Jackson-centric so far and how I became involved in the media storm surrounding his death. But in the meantime, a few updates.

Charles
Posted by Charles Thomson at 00:55