I saw Chuck Berry live twice – both times in the same year. The first time was at London’s Hackney Empire in July 2008. I almost never made it, having initially ordered my tickets through a hotline I saw advertised in a newspaper, which turned out to be a scam. I realised my blunder in time to halt the transaction but by then the show was largely sold out and only the very worst seats remained. I went to and fro over whether I wanted to watch Chuck from the nosebleed seats but eventually decided that I did and persuaded my friend Graham to come with me.

When I telephoned the theatre to book tickets, the lady in the box office was just about to reserve me some seats in the gallery when she paused. She said the system was showing that the theatre had just released some seats that morning, which it had previously been holding back. They were in the front row. Did I want those instead, she wondered. I didn’t need to be asked twice.

Graham and I caught a train and then a bus to Hackney for the show and took our seats in the front row, just right of the aisle, not really knowing what to expect from Chuck, now well into his old age. The theatre was beautiful and the audience filled with ageing Teddy Boys sporting elaborate hairdos.

The band kicked in a few seconds before the curtain rose to reveal Chuck already on stage, decked out in a glittery shirt and a white sailor’s cap. He launched straight into Roll Over Beethoven and, almost immediately, did his famous duck walk from one end of the stage to the other. He was fast and nimble. It was hard to believe this was a man of 81 and even harder to believe that the Chuck Berry was performing Roll Over Beethoven just a few metres away from us. 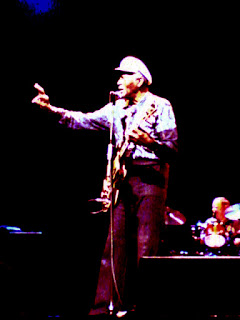 A grainy cellphone shot of Chuck Berry at the Hackney Empire (Charles Thomson).

In an hour-long set he blasted through hit after hit, from School Day (Ring Ring Goes The Bell) to Memphis Tennessee and Sweet Little Sixteen. He got the whole audience singing and laughing along with My Ding A Ling and invited some lucky women on stage to dance during Johnny B Goode. He had many more dancing in the aisles, too. Sadly, security were very heavy-handed and kept instructing people to sit back down, despite Chuck repeatedly shouting from the stage to let them dance.

Chuck was was so good that night that when, a few months later, Camden’s Jazz Café announced he was returning to London to play two shows at the venue, I told my friend James that we had to go. The Jazz Café was a favourite venue of mine at the time – small and incredibly intimate.

The choice of venue got me thinking. I had been to the Jazz Café enough times to know the artists usually entered through the same door as the ticketholders. I checked with a promoter friend who had booked artists into the venue and he confirmed the front door was also the artist entrance. James and I hatched a plan to get to the venue early and see if we could collar Chuck for an autograph on the way in.

Chuck, despite his many positive qualities, was not famed for his kindness towards fans. Musician Brian Johnson wrote in his autobiography that after Chuck toured with Johnson’s band Geordie for a week in 1975, using all their equipment for free, Johnson asked him: “Mr Berry, can I have your autograph?” Chuck replied: “I only sign one a day and I’ve already done it.”

If James and I were to get an autograph, we would have to be the first to ask that day. And so we arrived at the Jazz Café’s front doors at about 2pm, to make sure we didn’t miss him. By the time the doors opened about five hours later there was no sign of Chuck – we concluded he must have arrived about 10 hours early just so he wouldn’t have to sign his daily autograph – and we were cold and wet and our feet were sore.

On the plus side, we were numbers one and two in the queue and bagged ourselves a spot in the standing area, right in front of the stage.  Literally. It’s a tiny venue with a low stage and no barrier. When Chuck descended the metal staircase to the stage a few hours later and took his spot behind the microphone, we were perhaps four feet away from him. He was playing his guitar right in front of our faces.

But he wasn’t playing it very well. Chuck was unrecognisable as the performer I had witnessed months earlier at the Hackney Empire. He seemed at times hesitant and confused.

His guitar playing was wonky throughout. He faltered at the beginning of Sweet Little Sixteen and had to start again. During South of the Border, he lost his place and announced, “Damn, I can’t think of the next line.” Apologising for his confusion at one point, he said, “I’m 81 years old, I’ve got no business being on this stage.” He was actually now 82. 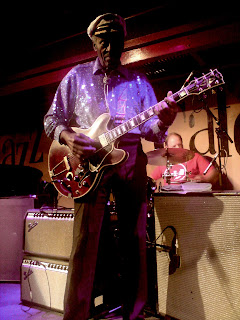 Chuck Berry on stage at the Jazz Café (James Newman).

Partway through the show – just before he played Nadine – he decided his guitar was out of tune (it wasn't) and began twisting knobs back and forth with abandon. The ensuing, lengthy, ham-fisted attempt to re-tune his guitar prompted an array of comical facial expressions from his alarmed band members, including his son, who after a while tried to step in and stop his dad fiddling with the strings.

But it was too late for intervention, for by that time Chuck had begun walking to the opposite end of the stage and yelping at his young pianist, “Give me an E! Give me an E!” Alas, the pianist’s efforts did not appear to aid Chuck, who played the rest of the show with his guitar sounding rather peculiar. 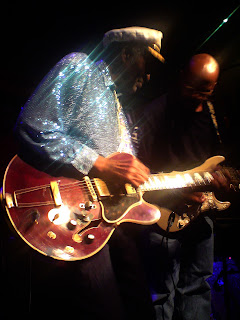 Chuck Berry with his son at the Jazz Café (James Newman).

None of this is intended a criticism of Chuck, of course. As he had said, he was in his 80s and he didn’t have to be up on stage. We were lucky he was there at all and only a fool would expect a man of 82 to perform to the same standard as his younger self. Chuck was simply acting his age. But nonetheless, it was in stark contrast to his effervescent performance months earlier at the Hackney Empire, where he had defied his years.

Who knows what the problem was; Perhaps he was jetlagged. Maybe he hadn’t had a night off that week. Perhaps I had just caught him on uncharacteristically good form in Hackney.

Whatever the reason, it certainly didn’t diminish Chuck in the eyes of the audience, who laughed and cheered throughout the show. His confusion was endearing and he handled the situation with great humour. James and I look back on that evening extremely fondly. We have relived it several times, in hysterics as we recalled the sheer horror on the band’s faces as Chuck started meddling with his guitar. There is some video of the tuning incident on YouTube, although sadly incomplete and recorded from the side, missing the band's brilliant reactions.

A year later I learned Chuck was returning to the UK to play a show at one of my local theatres and bought tickets. However, the tour was later cancelled – apparently due to a dispute with the promoter – and he never returned to the UK.

He may have been well into his old age by the time I got to see him but it was a privilege to witness the man up close, even on an off day. Chuck Berry was one of music’s great pioneers, not to mention a phenomenal songwriter with a gift for musical storytelling which will likely never be rivalled.

More than that, though, he was a survivor. The obstacles he had to overcome were many and enormous. The genre he innovated was hijacked. Rock & Roll's creation was attributed to its white thieves instead of its black pioneers. Meanwhile, Chuck was maligned and mistreated by a racist justice system.

But despite everything, he soldiered on. He survived touring segregated America, he survived the theft of his music, he survived prison and he reached 90. He died a hero and a legend.

I am grateful that for a few brief hours we occupied the same space. My friends and I clapped and bobbed as he played the songs that changed the world. We laughed together. He duck walked past me, within touching distance, playing Johnny B Goode. I couldn’t ask for more than that.


Rest in Peace, Chuck Berry. The true King of Rock and Roll.

Here is a video I took on my cellphone of Chuck performing Johnny B Goode at the Jazz Café:

Posted by Charles Thomson at 00:47