I promised to notify you as soon as my interview with Ralph Steadman was published. Here it is as it appeared in this week's editions of the Yellow Advertiser - Britain's biggest regional newspaper series. Unless you have a massive screen, you won't be able to read that, though, so click here to read it on the YA website. 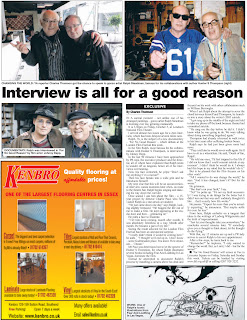 Those of you who have followed me on twitter for a while or who know me in person will know that the London Film Festival is something I'm very passionate about. I first joined the BFI and became aware of the festival as a teenaged film student. Since then I have set aside the duration of the festival every year to squeeze in as many galas, screenings and events as I can. In 2010, I even covered the festival for two American websites. A lot of my reviews from that year are available here.

This year I achieved a festival first by scoring tickets to the opening night gala - they're like gold dust - which also happened to be the European Premiere of Tim Burton's Frankenweenie 3D. Mr Burton was in attendance, as were cast members including Catherine O'Hara and Martin Landau. I took my younger brother - an animation student. It was his first ever movie premiere. 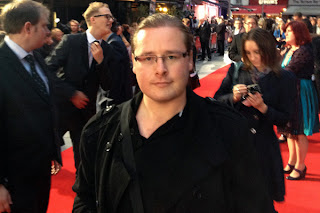 On the red carpet.
Click to enlarge. Picture property of Charles Thomson.

The film itself is a remake of sorts. In the 1980s Burton made a short film titled Frankenweenie - a live action piece which borrowed heavily from Frankenstein, about a boy scientist who revived his pet dog. It appeared as a special feature on several incarnations of the Edward Scissorhands DVD. He has now revived the piece as a feature-length, stop-motion, 3D spectacular. 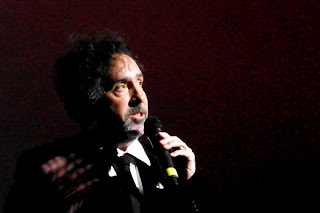 Tim Burton took to the stage to introduce the movie.
Click to enlarge. Picture property of Charles Thomson.

I caught Burton's last offering - Dark Shadows - on a plane from Boston to Heathrow last month. Halfway through, I switched off and opted to watch a small animated plane chart our progress across a map of the Atlantic Ocean instead. His previous two features - Alice In Wonderland and Sweeney Todd - held my attention a little better but still seemed to be lacking that quintessential Tim Burton charm. So I am relieved to report that Frankenweenie is his best offering in years.

Deeply moving in some places and hilarious in others, it is thematically similar to Edward Scissorhands, exploring the plight of the misunderstood outsider and the injustices they can face. The animation is beautiful and the script is clever enough to keep both kids and parents entertained. For movie buffs, it's also crammed with funny references to horror flicks and monster movies spanning all eras, from Bride of Frankenstein and Godzilla to Jurassic Park and American Werewolf in London.

To top off the evening, I walked away with a goody bag from festival sponsor American Express. 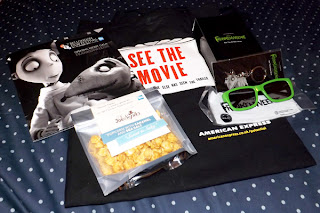 He's some video my brother and I took from our second row seats inside the cinema. The crowd was entertained by a live organist until Tim Burton took the stage to introduce his ensemble cast.The movie received a rapturous round of applause as the credits began to roll.

Posted by Charles Thomson at 03:42

In September 2010 I received an email from an aspiring writer called Danielle, asking me to take part in a Q&A about journalism ethics and practices. My heavy work load meant that I didn't complete the interview - carried out via correspondence - until June 2011. By that point Danielle was busy with her own journalism degree and publication was delayed a couple of times. Until tonight, I had forgotten about it.

But I just received an email from Danielle to tell me that at long last - almost 18 months after it was completed - our interview has gone live. Looking over it, I had forgotten how much depth I went into for some of the questions - they are like essays on particular areas of journalism ethics.

Amongst many other issues, I talk to her about why objectivity in journalism is actually often a bad thing, the institutional problems which can lead to farcical reporting and the journalists inspired me - and still inspire me - to do what I do.


Click here to read our interview.
Posted by Charles Thomson at 02:24

As I signed off my previous blog about my exclusive preview of the new Michael Jackson exhibition, I promised to post the article as soon as it was published. Here it is as it appeared in the Yellow Advertiser, Britain's biggest regional newspaper. 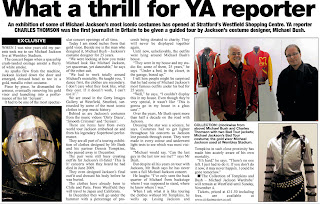 The interview, which lasted roughly half an hour, produced a 4,000 word transcript. Limited space in the newspaper meant it had to be cut to 600 words. I may post an extended version of the piece online in the future.
Posted by Charles Thomson at 22:19

Fear and Loathing at the London Film Festival

On Friday, the morning after my advance tour of the Michael Jackson exhibition, I set about trying to arrange another interview. The London Film Festival begins this week and I knew that a documentary was screening about Ralph Steadman.

Mr Steadman is probably best known for his collaborations with Hunter S Thompson and I am a huge fan of their work together. I even wrote my university dissertation on Hunter's gonzo journalism and to what extent its influence could still be felt in contemporary journalism.

While the pair's most famous collaboration is probably Fear and Loathing in Las Vegas, I have two favourites; one from the early years and one from the latter. The first was their debut, 'The Kentucky Derby Is Decadent and Depraved', written for short-lived magazine Scanlan's. The second is a giant coffee table book, 'The Curse of Lono', in which Hunter drags Ralph to Hawaii to observe a marathon, setting in motion a chain of catastrophic events.

Knowing the Steadman documentary - 'For No Good Reason' - was screening at the film festival a week later, I called the press office on Friday morning to see whether Mr Steadman might be in town giving interviews at any point.

To my surprise, I was told Mr Steadman was at the BFI National Film Theatre at that very moment. At midday I received an email telling me I had been allocated a slot at 2pm. I had nothing with me - no dictaphone, no camera - so had to leg it home, gather my equipment and dash to the train station.

I made it to the BFI with just ten minutes to spare but that didn't matter in the end. The gentleman before me was still waiting and we were told there was a backlog. As time wore on - and 2pm became 3pm - we were approached, variously, by PR workers, the film's executive producer and its director, all of whom explained that Ralph had a tendency to veer off on wild tangents and his interviews were all overrunning as a consequence. 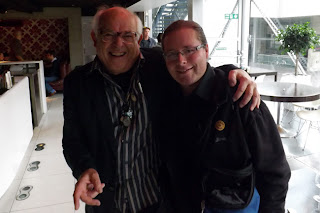 Eventually, Mr Steadman loomed over me, grinning maniacally and claiming I shouldn't ask him any questions because he was a 'moron'. It was a strange beginning to a strange interview, which should be published later this week.

Before we parted ways, I asked Mr Steadman if he'd do me the honour of signing my copy of 'Fear and Loathing in Las Vegas' ('The Curse of Lono' wouldn't fit in my bag). He went a step further, drawing Hunter's face - complete with cigarette holder - then raising his fountain pen above his head and flicking it downwards, splurting ink all over the book (and my dictaphone and the BFI's table). We had a few pictures taken and then I headed home.

It was certainly not an encounter I'll forget in a hurry. As soon as the article is published, I will post it here. 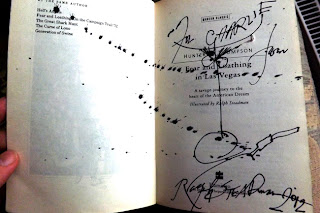 Posted by Charles Thomson at 22:08

Several months ago I gave an interview to Dancing With The Elephant - a blog which takes an academic look at the life and work of Michael Jackson. The blog owners Willa and Joie, who I have taken part in round table discussions with in the past, wanted to talk to me about my work on Jackson's trial and, in particular, my involvement in the release of his FBI files.

The interview finally went online today and can be read here.
Posted by Charles Thomson at 00:46


Tonight was the official press launch of 'The Collection of Tompkins and Bush: Michael Jackson Wardrobe'. The exhibition - which will run at the Westfield Shopping Centre in Stratford, London, until early next month - features an array of iconic outfits from all of Jackson's world tours as well as his music videos and other public appearances. Each of the costumes on display was designed by Michael Jackson's costume designers of 25 years - Dennis Tompkins and Michael Bush.

This evening I had the great honour of being the first journalist in Britain to be taken on a tour of the exhibition. My tour guide? Michael Bush.

The press launch officially began at 5.30 this evening, but I met Mr Bush outside at 5pm, where I chatted to him for about 15 minutes while we waited for the lights inside the gallery to be switched on. When everything was up and running we continued our interview inside as he led me around his favourite exhibits.

The exhibition, which coincides with the imminent publication of Mr Bush's book 'The King of Style: Dressing Michael Jackson', is definitely an exercise in quality over quantity. The space isn't enormous, but it is teeming with historic designs. You will see the suit Michael Jackson wore for the Smooth Criminal short film. The outfit he wore in the Scream music video. The patented shoes he invented with Bush and Tompkins so he could lean forward 45 degrees live on-stage. The outfit he wore during his 1993 Superbowl performance. The costume he used to open his Bad World Tour. And a whole lot more. 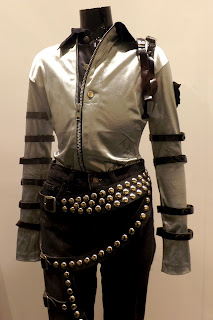 The collection is not complete. Some items displayed at previous incarnations of the exhibition are nowhere to be seen in London. They include Jackson's gold costume from the HIStory World Tour, the suit he wore in 2002 for his last ever live performance in front of an audience and the jacket he wore in his Leave Me Alone music video. Also missing are various signed sketches demonstrating Jackson's involvement in the design process.

This could be because the collection has been split. According to the tour schedule, it opens in Tokyo before it closes in London - so it follows that the missing items are probably on their way to Japan. That said, I've been told that some items will be switched over on October 14th to change things up, so perhaps these missing items will manifest themselves then.

After Tokyo, the collection will go on display in Los Angeles. Then, across three days in November and December, the items will be auctioned off. A portion of the proceeds will be donated to charity. Mr Bush explained to me his decision to sell off the items in our interview, which will be published next week.

Our discussion ranged from how certain costumes were conceived and created to why Michael Jackson took such a long break from touring between 1997 and 2009. Mr Bush also spoke to me about his work on This Is It in the months before Jackson passed away and, at one point, became choked up as he explained how the death of his partner Dennis Tompkins last December reaffirmed his decision to write the book and take the costumes around the world.

As soon as the interview is published, I will post it here. 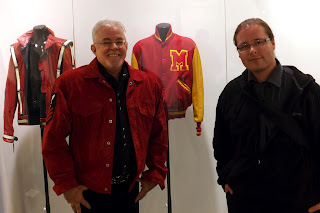