Last week I had the privilege of interviewing one of my favourite musicians. Bootsy Collins played bass on some of James Brown's funkiest and most dynamic tracks. He then took Mr Brown's philosophy of 'the one' over to George Clinton's Parliament / Funkedelic, where he worked on some of that collective's greatest tunes as well. By the late 70s he had gone solo, recording a raft of classic funk tracks. He has contributed to some of the greatest party anthems and hip-hop tracks of all time. His live shows are some of the most dynamic and exciting you could ever hope to attend. 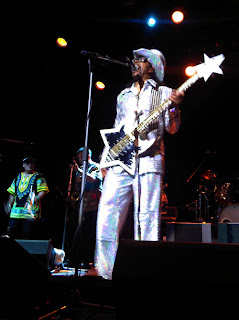 Right now, Bootsy is running a Kickstarter campaign, where he is giving away signed merchandise and rare memorabelia to anybody who supports his new album and tour - both dubbed 'iGiveAFunk'. The project, inspired by the philanthropic work Bootsy has gained a passion for in recent years - would see him record a 'unity in the community' themed album and then travel the globe delivering its message. The plan was for the Kickstarter to raise $100,000 in 30 days.

Presently, there are three days left of the campaign and Bootsy has raised roughly 30% of his goal. Sadly, it looks unlikely that the project will be successful, short of a miracle. I'm not sure why. Bootsy toured Europe in 2011, playing to packed out venues all across the continent. He has thousands and thousands of fans. As part of his Kickstarter campaign, he is offering a digital pre-order of his new album for just $1. If all of his fans pledged for that alone - and you'd have to be a wally not to, at that price (about 65p in British currency - less than a KitKat bar) - he would meet his target with ease. He seems to have had trouble getting the message out.

I wanted to do the best I could to help him get that message out, so I organised a 40 minute phone interview. During our chat, I expressed my surprise that he needed a Kickstarter campaign in the first place. The comment led to a lengthy discussion about the music industry in general and the way it treats artists. Bootsy told me he was 'one step away from being a starving artist'.

I produced a 2,000 word article based on our conversation, published on my blog at the Yellow Advertiser - one of the largest regional newspapers in the UK. A short news story publicising the online contribution was published in over 100,000 newspapers. How many readers were funk fans, I don't know. 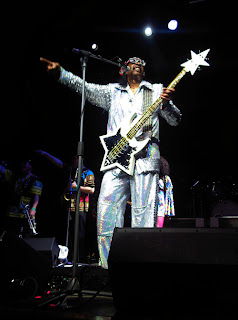 If Bootsy's Kickstarter campaign doesn't prove successful, I hope he will try again but spend a little longer on advance publicity it and give himself a longer fundraising period. I'm sure he has enough fans to help make it happen, just as long as they know about it.

That said, on a personal note, I am a little disappointed that some of Bootsy's more prominent fans haven't made more of an attempt to help him out. Some of today's biggest rappers have built songs around Bootsy's riffs; songs which have helped them become businessmen with globe-spanning, multi-billion dollar operations. Those Bootsy samples they used - he says they just about cover his bills. Snoop Dogg, who used Bootsy on his 2004 album Rhythm & Gangster, is worth a reported $100million. He could probably sponsor Bootsy's entire project without spending more than a few weeks' interest on his bank account.

Click here to read my exclusive, in-depth interview with Bootsy.

Below is a 16 minute audio excerpt from our conversation.

Good luck Bootsy. I've already pledged all that I can. I hope you pull it out of the bag somehow. When you eventually do - I'll see you in London!

Posted by Charles Thomson at 00:27

For reasons I can't even begin to fathom, music legend Ben E King decided to visit my local theatre last week. As a co-writer of one of the top ten highest-earning songs on the history of recorded music, Mr King, now 74, surely can't need the money.

However, I wasn't complaining. In fact, I booked tickets the moment I found out (front row, no less) and made the 10 minute journey from my front door to the theatre with pleasure. What an honour to have a genuine superstar of soul performing on my doorstep.

I reviewed the show for the local newspaper, which you can read by enlarging this image. 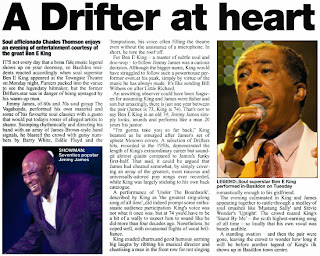 I met Mr King very briefly after the show. He was a true gentleman and signed a CD for me. Sadly, I didn't manage to pin him down long enough for an interview. Here's hoping he comes back and I get a shot second time around. 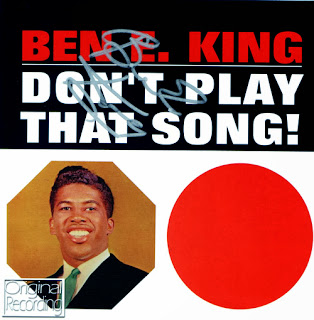 Posted by Charles Thomson at 00:03