BBC Television Centre will never be the same again. The iconic building in White City, used in aerial shots for many of the corporation's 'idents' and in which many of its most classic shows were filmed, is to be sold off thanks to David Cameron and his cabinet's decision to freeze the licence fee.

I've been to BBC HQ a number of times over the years. I've been to the recordings of many TV shows there, including Never Mind The Buzzcocks, The Catherine Tate Show, Friday Night With Jonathan Ross and Top Of The Pops. It was also at the BBC's White City base that I interviewed Jermaine Jackson in a vacant radio studio.

Now the corporation has been forced to sell off the site - where classic shows like Fawlty Towers, Monty Python's Flying Circus, The Two Ronnies and Morcambe & Wise were shot - and shift the majority of its operations up north. The area will be turned into a hotel and resort, with just three studios in the complex remaining active (it currently has eight working studios, numerous radio studios and hundreds of offices).

For many years the BBC has run a two-hour tour of the site for less than £10 per visitor. Upon learning just before Christmas that these tours would soon cease and it was our last chance to take a look around, my friend Angela booked a tour for the pair of us as a Christmas present.

We took the tour on Friday, January 25, before traveling to Paris.

The tour took in the BBC news room, multiple television studios (we spotted comedian Russell Kane rehearsing in one of them for the show Live at the Electric) and celebrity dressing rooms, where the guides dished the dirt on the divas with the biggest demands. I was chosen to 'host' a weather transmission in front of a greenscreen and other participants were nominated to take part in a Name That Tune style quiz, buzzing in with their answers in a bid to win some BBC merchandise. Along the way we spotted lots of TV artefacts, from Pat Butcher's earrings to the Dr Who Tardis.

The tour only runs until February 22, so this really is your last chance to explore the most iconic building in British television history. Tickets are available here. 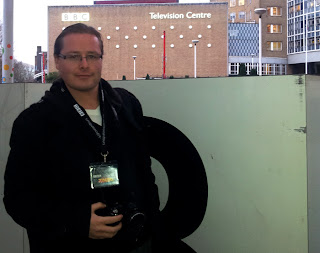 Exploring the BBC studios one last time. Pic by Angela Kanda.
Click to enlarge.
Posted by Charles Thomson at 00:32