My latest in-depth feature, 'The Big Payback', explored a variety of humanitarian initiatives inspired by Godfather of Soul James Brown. Published by the Orchard Times, it saw me interview Mr Brown's friends and family about  the various charitable ventures staged every year in his memory, all run by his children without any financial assistance from his estate.

Also among my interviewees were some of the teens from Augusta, Georgia, who have benefited from the Brown dynasty's latest venture; the James Brown Academy of Musik Pupils (JAMP). The school was set up to teach young people how to play instruments and help them secure college scholarships. Since its launch just over a year ago, it has already helped one Augusta teen secure a scholarship.

The JAMP students have put their talents to good use by forming a band - the JAMP Masters - which plays at charity and community functions. After a VIP invitation to perform and sit in the front row at one of Prince's concerts in Chicago last year, the youngsters have been into the studio to record their first album.

I was honoured and delighted to receive a parcel this morning containing a copy of that album. Many of the young band members had signed the CD as a 'thank you' for my article, which curriculum leader Kimberly Baxter-Lee said she showed to them shortly after it was published. 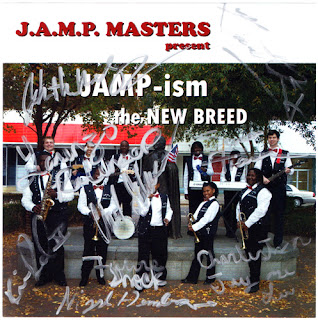 The collection, which comprises 10 James Brown and JBs covers, is impressively tight given the age of the performers and the short time they've been together. With the assistance of former James Brown guitarist Keith Jenkins, they have achieved the 'dry, funky sound' that the Godfather of Soul was always so keen to capture.

Keith's input is also felt in the arrangements, which are in some cases closer to Mr Brown's latter day live performances than the original studio recordings. 'Get Up Offa That Thing' and 'I Got You (I Feel Good)' are particular highlights. The youngsters play so well that you wish the songs would just go on and on.

All proceeds from the album will be spent on the continued running of the academy. Mr Brown's daughter Deanna tells me that a second volume is already on the horizon.

I want to say a big thank you to the JAMP Masters for this CD. It will take pride of place alongside albums signed by the likes of George Clinton, Martha Reeves, Pee Wee Ellis and Fred Wesley - and it means every bit as much as the others.

Click here to listen to excerpts or buy the album (available physically or digitally).
Posted by Charles Thomson at 03:03