The Big Payback; Giving in the Name of the Godfather

Today the Orchard Times published my latest feature; the first of its kind (in-depth, multiple interviewees) that I've written since 2010.

The article, titled 'The Big Payback', explores James Brown's little-known humanitarian legacy and how his family has battled since his death to keep his charitable initiatives going despite receiving no financial assistance from his Estate.

Thanks to schemes launched by James Brown before his death, thousands of underprivileged families every year, across two US states, are able to eat a traditional Thanksgiving turkey dinner and give their children a bag of Christmas presents. Moreover, since 2011 the James Brown Academy of Musik Pupils (JAMP) - conceived by Brown in the years before he passed away - is helping Augusta teens to secure college scholarships. 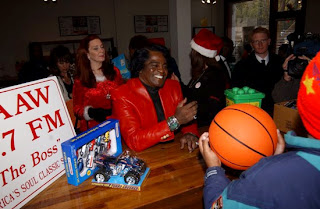 James Brown hands out Christmas presents to underprivileged children in Augusta, Georgia, in the 1990s.
Picture supplied by the James Brown Family Foundation.

The story also explores James Brown's complex relationship with hip-hop music and his crusade in the final years of his life to promote legitimate, instrumental music and steer kids away from violent, demeaning lyrics.

To write the piece, which I did pro bono, I spoke to Mr Brown's daughters Deanna and Venisha, his long-time friend and producer Derrick Monk, JAMP co-ordinator Kimberly Baxter-Lee and several of the academy's young students.

Derrick read the feature for the first time earlier today and told me it brought tears to his eyes to see somebody write about 'the real James Brown'. That one comment made all of the work - which took over a year, on and off - worth it. 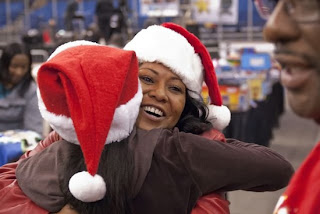 
Click here to read the article.
Posted by Charles Thomson at 03:47