I received a text message from my editor this afternoon - I was crossing the River Thames from Gravesend to Tilbury on a dilapidated ferry at the time (long story) - to tell me I had been nominated in the Best Newcomer category at the EDF regional press awards. Although I have worked as a freelance reporter since 2008, I only began full time work on a regional newspaper in late 2011.

I've been nominated for a trio of stories. The first was a gonzo account of my thwarted attempt to interview controversial former TV presenter Michael Barrymore. Barrymore, for those who don't know, was the king of British primetime TV in the 1990s but his career was left in tatters when a dead man was found floating in his swimming pool after a drug-fuelled party. DNA cleared Barrymore of any involvement in the man's death but the scandal was sufficient to ruin him.

I arrived at a secret location, where Barrymore was recording a guest show for a local radio station, under the impression that he had agreed to an interview. He denied ever agreeing to any such thing and seemed quite perturbed by my arrival, but allowed me to stay on the condition that I sat quietly and didn't ask him any questions. That didn't last long.

About a third of the way into the recording he began interrogating me on-air. "I'm interviewing a journalist!" he declared. His refusal to give me an interview became a running joke throughout the broadcast and his antics were perfect fodder for a first-person feature. The icing on the cake was that after our radio chatter he did give me a few exclusive nuggets for the newspaper after all.

The second piece I've been nominated for was a court story about a local man who had been caught in possession of more than 100,000 images of child sex abuse. Several hundred were considered to depict the most shocking and sadistic level of abuse. There were videos too.

Sadly, that is not a particularly uncommon story. What made this scenario unusual was that I arrived at the courthouse to discover that a magistrates court had slapped a bizarre reporting restriction on the case in a previous hearing. They had banned any publication of the man's address because he did not live alone and they said his family could suffer from vigilantism.

In my view, the reporting restriction was a nonsense. Firstly, making court orders to prevent vigilantism is like putting signs up in car parks reminding people that it is illegal to steal cars. People don't need to be reminded that it is wrong. Everybody knows that it is wrong. It is already regulated by existing laws.

I raised the issue with the court clerk, who in turn agreed to pass my concerns to the judge. However, the clerk forgot and the hearing concluded. Just as the judge was about to rise, I stood and addressed him. He sat back down.

The defence barrister and I swapped legal arguments and the judge deliberated. He sided with me, concluding that the restriction set a disturbing precedent. He ordered that it be lifted so I could publish details of the man's crimes. It turned out I was the first reporter at our newspaper to ever overturn a reporting restriction completely off the cuff - reporters are usually aware of them and able to plan their arguments for days before the hearing.

Three months later I stumbled across the story that would lead to my third nominated article - again at the local courthouse and again involving child abuse.  I knew that a man called Barry Snow was due in court over alleged child abuse. I didn't know that the circumstances of his offending would lead the presiding judge to publicly criticise the Jehovah's Witness church over its handling of child sex abuse cases.

Snow had repeatedly molested a girl under the age of 10 in the late 1970s, when he was in his late teens. His crimes were reported to the Jehovah's Witness church, where he was a dedicated member. Instead of reporting the abuse to police, church elders handled the matter internally. Snow went on to molest several more children.

At first I assumed that the church elders had committed a criminal offence by failing to report the abuse to police. But after a little digging I discovered that this was not the case. Counter-intuitive though it may seem, in the UK there is no statutory obligation for anybody - even a school - to report suspected child abuse. If you sign your child up to a scouts group or a football team or a nursery and they suffer abuse while they are there, they have no statutory right to have that abuse reported to the authorities.

The result was a news feature which used the Barry Snow case as a springboard to explore the ongoing but little-known campaign in the UK to introduce laws requiring schools and other children's organisations to report suspected child abuse to police. Just a few weeks after it was published, the Jimmy Savile scandal erupted and sent shockwaves around the country, bringing this very subject to the forefront of popular debate.

I haven't yet heard where or when the ceremony will be held. I have no idea what articles any of the other nominees have been shortlisted for and I certainly won't go in the expectation of winning. I didn't even think I'd be nominated. But it is an honour that I have been, and I am most grateful. 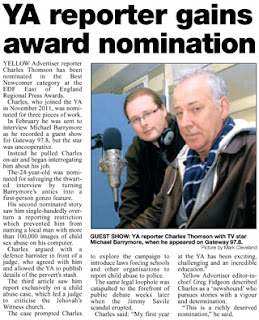 Posted by Charles Thomson at 23:16