I had the chance recently to interview Pauline Black, lead singer of 80s two-tone pop group The Selecter. Pauline is appearing at a local library as part of an upcoming book festival to discuss her memoir, Black By Design. In anticipation of the interview I got hold of a copy and found it to be a fascinating window on Britain in the 1950s.

Pauline grew up as a dark-skinned, mixed-race girl in Romford at a time when it was unusual to see a black person in the area - circumstances that will be inconceivable to anyone who has only known Romford within the last few decades. Adopted by a white family, she was the only black pupil at her school.

Her book details the racist abuse she suffered, how she became politicised by the music of James Brown and the writings of Malcolm X and, quite movingly, the sexual abuse she suffered as a pre-pubescent girl - plus all the sorts of backstage exploits you'd expect from a music industry memoir.

She spoke frankly about all of these things in our interview, as well as touching on recent child abuse scandals and discussing the racial climate in Britain today - particularly in relation to the the London 2011 riots.

Here's a copy of the piece as it went into the paper. 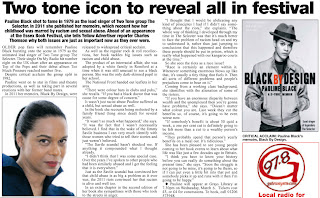