Last week I had the opportunity to interview reality TV star Amy Childs. Amy shot to fame on ITV2 show 'The Only Way Is Essex', which has divided the people of Essex (some have adopted the show as a lifestyle template, others believe it is detrimental to the entire county's image), and divided critics.

I have only seen one episode of TOWIE and I can't say I was a fan. The cast had gone 'glamping' (glamorous camping) and my only real memory, besides the terribly stilted acting, was the enforced idiocy. Two men were shown trying to dig a toilet with bendy twigs. Nobody is that stupid. The whole thing was clearly staged. I found it infuriating.

Nonetheless, I found Amy to be a lovely woman with a keen business sense and a lot of ambition. Here's how it looked in the paper but I think the image is too small for the print to be visible, so I have pasted the story itself below. 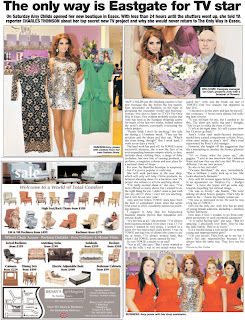 On Saturday Amy Childs opened her new boutique at Basildon’s Eastgate Centre. With less than 24 hours until the shutters went up, she told YA reporter Charles Thomson about her top secret new TV project and why she would never return to TOWIE.

AMY CHILDS is putting the finishing touches to her new boutique. Tomorrow she will officially open it. Fans are expected to descend on Eastgate in the hope of glimpsing the presenter, model and businesswoman who shot to fame on ITV2’s The Only Way Is Essex. Few of them probably realise that Amy has been at the Eastgate for much of the last two weeks, hidden behind the store’s shutters, personally overseeing the whole project.

“People think I don’t do anything,” she tells me during a 15-minute break. “They see the products and the shops and they say, ‘What’s she even doing, though?’ But I work hard. I work seven days a week.”

The hard work has paid off. As TOWIE’s most successful alumnus, she is now the face of an ever-expanding business empire which, to date, includes three clothing lines, a range of false eyelashes, her own line of tanning products, a perfume, a magazine column and now plans for a national chain of shops.

For now, the Basildon boutique is temporary – but if it proves popular it could stay. She will work part-time in the new shop, which will only sell Amy Childs products, in-between shooting dates for a lucrative new TV project she refuses to tell me anything about.

“I’m really excited about it,” she says. “I’ve been offered so many shows but I wanted to do the right thing for me. I didn’t want to just rush into any old TV show. I can’t tell you anything, but it will be out next year.”

Amy and her fellow TOWIE stars have been the butt of comedians’ jokes since the series first aired in 2010, constantly painted as preening dimwits.

I suggest to Amy that her burgeoning business empire throws that reputation into serious doubt.

“It’s not true at all,” she protests. “I’ve always been business-minded. Ever since I was 13 I’ve known I wanted to own shops. I worked in a salon for two-and-a-half years before I was on TOWIE and had lots of clients who came to see me at home. I’ve always worked hard. But when I did TOWIE, doors opened for me.”

So was TOWIE a means to an end?

“Not at all,” she says. “But I never wanted to be on the telly. I was in two minds when they asked me.”

Amy was the break out star of TOWIE’s first two seasons but departed in late 2011.

“I decided to do the show and just be myself,” she continues. “I loved every minute but nothing lasts forever. It was brilliant for me, but I needed to do this. The show got really big and I thought, ‘You’ve got to make the most of this’. I left at the right time. It’s still a great show but I’d never go back.”

However, she laughs off the suggestion that she’s attempting to emulate the former glamour model.
“It’s so funny what the press say,” she giggles. “I said in one interview that I admired Katie and now they say she’s my idol. We are so different. I’m my own person.”

So who is her real idol?

“Victoria Beckham,” she says, immediately. “She is brilliant. I really look up to her. She looks absolutely fantastic.”

Amy will hit screens again before Christmas in an appearance on ‘Stephen Fry – Gadget Man’ – a move she hopes will go some way towards dispelling her airhead image.

“He was so lovely,” she beams. “We were talking all about beauty gadgets. That’s why he came to me – I know my beauty inside-out.

“He was so interested in me. He said he was a big fan of TOWIE.”

He’s not the only one. Amy now has an army of young female admirers, including 1.2million Twitter followers.

How does it feel, I wonder, to go from complete anonymity to such enormous adulation?

“It is weird having fans” she says. “But it’s amazing. I absolutely love them. They’re like my little family. They’re so sweet.”

Is it a burden being a role model for so many young and impressionable girls?

”I’m just myself. They look up to me but I don’t feel any responsibility because I’ve always been the same way. They love me for me.”

Posted by Charles Thomson at 03:35