Last month I received two letters in the post at work from children at a local primary school. They were studying 'how the media affects our lives' and they wanted a real-life journalist to come in and give a talk. Ordinarily I would have politely declined, as I am no fan of public speaking, but my colleague Suzi talked me into it.

So last week the pair of us went to the school and spent an hour being grilled by 60 kids, all aged 10 and 11. Their teachers hadn't told them in advance that we were coming in and when they discovered who we were, I was susprised to hear them all gasp. It was a big deal to them, which just made me even more nervous. 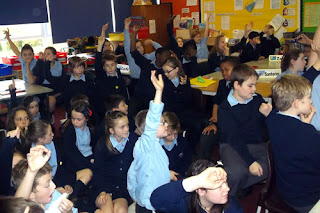 Lots of hands in the air, waiting to ask questions.

Thankfully, Suzi was brilliant. Having had some teacher training, she was able to talk to the kids on a level they could understand, adopting a sort of animated persona and keeping them giggling. They were a little too young to grasp a lot of what our job entails - trying to explain government corruption to a 10-year-old is a losing battle, and the content of a lot of the court and crime stories we cover would be entirely inappropriate for their age group. 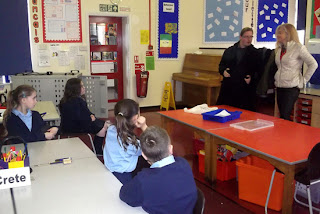 Suzi and I answering questions.

However, they were very entertained to hear that I had just interviewed a man who was about to chain himself to a tree to stop the local council from chopping it down, and they loved hearing about the time Suzi had lunch with Prince Charles. They asked, bizarrely, if either of us had met James Bond and were most excited to hear that I had once got Daniel Craig's autograph (nothing to do with work, though!).

We got some lovely 'thank you' letters in the post a few days later. One of them said, "Throughout the amazing hour you were here we have learnt much more about the media than we expected to know by the end of this topic. We had lots of fun and are now inspired to become journalists like you." 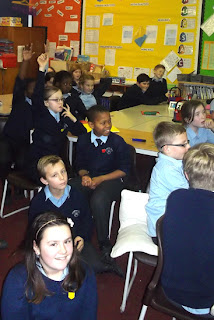 It was nice to see that the kids were so excited to have us there and to know that they enjoyed the experience. Maybe I'll be less hesitant when the next letter comes in.
Posted by Charles Thomson at 23:41