Randall Sullivan's new Michael Jackson biography is causing a lot of controversy. It's not hard to see why. Last weekend I spotted a feature in the Mail on Sunday, taken from Sullivan's book. It included an allegation that Jackson's years of plastic surgery had left him with no nose and he had to wear a prosthesis. The story said Jackson kept a jar of fake noses and a tube of glue beside his bed.

I haven't read Randall Sullivan's book yet so I won't comment on it as a whole, but the Mail on Sunday article was a travesty of journalism. At first I found it disappointing, but when I realised that it was not only Sullivan who had let the prosthetic nose nonsense into print but also his publishers', their legal team and subsequently the Mail on Sunday's editorial and legal staff, I thought it stopped being disappointing and started being sinister.

There is no way the story could go through to many legal checks without somebody realising it was deranged. It was clearly sent to print in the knowledge that it was false. And if it wasn't, every staff member who checked it before it went to print should be sacked with immediate effect because they are incompetent. On the other hand, if they sent it to print in the knowledge it was false then they should still be sacked. Either way, they are unfit to do their jobs.

Anyway, I digress. I got an email the other day to tell me that I am repeatedly referenced in Randall Sullivan's book. In his acknowledgements section he describes my Huffington Post articles about Michael Jackson as 'excellent' and I am told he references them several times.

Even more excitingly, Mr Sullivan writes in the acknowledgements that he was introduced to my work by none other than Thomas Mesereau, the magnificent civil rights attorney who secured Jackson's acquittal in his 2005 trial.

I met Mr Mesereau and his co-counsel Susan Yu at the London premiere of David Gest's Michael Jackson documentary 'Life of an Icon' last year. They were both very complimentary about my work. I had appeared on the radio with Mr Mesereau a few weeks earlier where he had also praised my work. However, I was unsure if he was just being polite. He seems like a very nice man.

To learn that Mr Mesereau privately refers people to my work when they ask him questions about the Michael Jackson trial is extremely humbling. I was a journalism student when Jackson's trial was going on. I remember following it every day - reading the transcripts and the media coverage. I remember watching the verdicts live on BBC News with my mother and my brother. I could never have even conceived at that time that one day Tom Mesereau would be pointing to me as an authority on the trial he worked so hard to win.

So anyway, a big thank you to Tom Mesereau - a hero not only for his valiant work in 2005 but for his catalogue of pro bono work in the Deep South. He is a conscientious and valiant man who excels in his profession. As Mr Sullivan writes in his acknowledgements - Mr Mesereau is just about the only prominent figure in Jackson's life who has escaped significant criticism from his fans. It is an honour to have his endorsement. 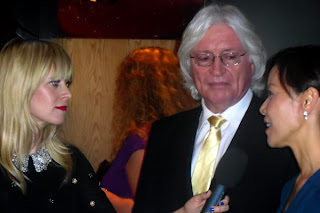 Thomas Mesereau and Susan Yu at the London premiere of 'Life of an Icon'. Picture by Angela Kande.
(Click to enlarge)

Posted by Charles Thomson at 01:43