On June 20th, French TV station France Ô will screen Conrad Murray's controversial documentary about the death of Michael Jackson - and a lot of Jackson's fans are less than happy about it. Largely shot during Murray's trial and shown around the world in the weeks after he was found guilty of Jackson's manslaughter, the documentary tells his version of what happened on June 25th 2009, the day Michael Jackson died in his care.

The documentary sparked outrage when it first aired in November last year. Jackson's fans organised a campaign and vowed to boycott, while his Estate publicly demanded that it be banned from the airwaves. In an open letter to Comcast, NBC and MSNBC, the Estate complained that Murray had 'refused to tell his story under penalty of perjury in a court of law' but had now, post-conviction, released a documentary in which he blamed Michael Jackson for his own death.

Ultimately, the documentary did Murray no favours. It actually became an aggravating factor in his sentencing hearing. In a witness impact statement, Jackson's mother Katherine wrote that Murray's comments in the documentary had added 'insult to injury' and showed that he was 'clearly not remorseful'. Judge Pastor, who presided over Murray's trial, agreed and sentenced him to the maximum possible jail term for Michael Jackson's manslaughter.

Fans have set up petitions and launched a huge campaign to have the documentary pulled from France Ô's schedule. Of course, the petitions will almost certainly be futile affairs. There's probably more chance of Conrad Murray releasing an album called Michael Jackson's Killer and outselling Michael Jackson's Thriller than there is of the show being pulled from the airwaves at this stage. If anything, the fans are most likely generating more buzz around the show, which will ultimately lead more people to switch on and see what all the fuss is about.

That's not necessarily a bad thing. A lot of these fans have never seen the documentary. I remember mentioning on Twitter that I'd watched it back in November and being sent a number of rude tweets, informing me that I should be ashamed of myself for tuning in. It was awful, the fans said, and they were boycotting it. But how did they know it was awful if they refused to watch it? How can one intelligently comment upon a documentary without having seen it?

If those fans had tuned in, they would know that for the vast majority of the show - currently on YouTube, for anyone interested in checking it out - Murray comes across as a deeply deluded individual, to whom telling lies comes as naturally as breathing. He constantly makes claims which were refuted by the evidence in his trial and the camera crew also films his defence team as they scheme to concoct outlandish theories around the prosecution's evidence.

In one scene, Murray's defence lawyers are seen wracking their brains for ways in which to counter the evidence of anesthetic expert Dr Steven Schafer, who quite literally wrote the instruction manual that comes inside every propofol box.  Lawyer Michael Flanagan is actually filmed suggesting that the defence needs to convince jurors that the coroner's verdict on Jackson's cause of death is incorrect. "We gotta get it to be a cardiac arrest," he says. The scene epitomises Murray's defence: 'Ok, our last harebrained theory hasn't panned out, what's our next one?'

In another scene, Murray - looking like a pay-per-view faith healer - closes his eyes and waves his arms in the air as he describes how the Holy Spirit came to him in a dream and promised to 'keep me safely in the secret chambers of his tabernacle'.

Any right-minded viewer watching the deranged doctor's ramblings will be left with the impression that this is a man they wouldn't leave in charge of their shopping cart, let alone their life. Far from painting Murray as a sympathetic figure, it only reinforces the perception of him as a charlatan. In the UK, it was screened under the title, The Man Who Killed Michael Jackson.

Amid all the controversy surrounding Murray's documentary, I was contacted a few weeks ago by a production company working for another French TV station called M6. The company was putting together a documentary to mark the third anniversary of Michael Jackson's death. The show would focus on the circumstances surrounding Jackson's death and, specifically, whether Conrad Murray was the only doctor to blame.

I am firmly of the opinion that Murray is the only doctor to blame for Jackson's death and thought taking part would be a good opportunity to make that point. The M6 documentary, titled Access Privé, is scheduled to air on June 25th, five days after the Murray documentary, and M6 scores far higher ratings than France Ô. 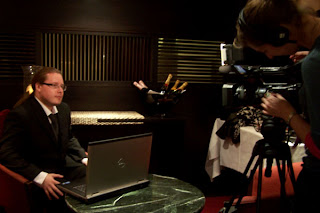 I was interviewed for the show on Thursday, June 7th, at the Millennium Hotel in Knightsbridge, London - about a two-minute walk from Jackson's favourite London shopping centre, Harrods. I was interviewed for roughly an hour by Amal El Hachimi from Spica Production TV, the company making the report.

It wasn't the easiest of interviews. The documentary's aim is to explore whether any other doctors were at all culpable in Jackson's death. I was repeatedly asked about the actions of other doctors who treated Jackson over the years. Questions like that are a legal minefield. To even hint that a doctor may have behaved unethically when they have never been charged, let alone convicted, is extremely legally precarious.

I wasn't too put off by the line of questioning. Amal kept returning to the subject, but I remained resolute: Michael Jackson's cause of death was acute propofol intoxication. Ergo, the doctor who administered that propofol - Conrad Murray - is the only doctor legally culpable for Jackson's death. If other doctors gave him medication over the years which they shouldn't have done, they should certainly be prosecuted for that - but the fact is, Jackson died on Murray's watch and as a direct consequence of Murray's actions.

I was asked a lot of questions about demerol, but stated repeatedly that there had been no findings in Jackson's autopsy to indicate any demerol addiction. There was certainly never any implication that it played a role in his death.

Other topics covered included theories that Jackson was worth more dead than alive, speculation that his publishing catalogue was a motive for murder and the hotly debated subject of Jackson's well-being during This Is It rehearsals. Discussing the latter, I recounted evidence given throughout Murray's trial from both sides of the fence, including both Ortega's email about 'pulling the plug' and the coroner's assessment that Jackson was 'above average health for a man his age'.

Almost every topic discussed during the interview was legally questionable but I took extra care not to say anything dangerous. My interview lasted an hour but the entire show - which will feature other interviewees including Frank Cascio - will only last 15 minutes. My primary concern is that during the editing process my considered, legally sound responses will have vital sentences lopped off of their beginnings or ends.

J Randy Taraborrelli once told me about the dangers of giving TV interviews. He said that he always took care to be fair and balanced but often found that in the editing process, vital material was cut away and what was left in didn't accurately represent the totality of his answers. I hope I'm not left feeling that way on June 25th, although it may take a while for me to find out what's actually been included, as my voice will be over-dubbed in French!

I took extra care to be fair, balanced and honest. I hope that's reflected in the edit and that I don't piss off too many fans. I don't want to be the subject of their next petition.

Posted by Charles Thomson at 20:06