My appearance on Access Privé, a French news and current affairs show, aired a couple of days earlier than I had anticipated. I got a few messages on twitter from people saying they'd seen it go out on TV station M6 on Saturday afternoon. Apologies for not letting you know in advance - I thought it was set to air on Monday.

The interview was filmed on Thursday, June 7th, at the Millennium Hotel in Knightsbridge. All I really knew at the time was that the show was intended to mark three years since Michael Jackson's death and would focus on the extent of Conrad Murray's culpability. 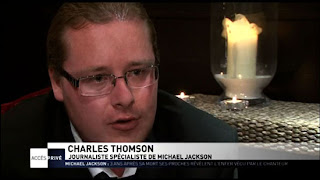 I was concerned about how it would turn out for a couple of reasons. Firstly, I was rather unwell at the time. My voice just about held out for the duration of filming. I think my illness is evident when you watch the report. I look rather clammy and tired. I'd also been rained on while on my way to the recording! But c'est la vie.

Secondly, I was worried because the interviewer, Amal El Hachimi, kept asking me about individual people and whether I thought they were culpable in Michael Jackson's death. I had never been involved in this sort of show before and I was concerned that if the editing made it look like I'd answered affirmatively, I could have found myself in a very precarious legal situation!

As it turned out, the direction of the report changed somewhat after Spica Productions TV - the production company behind Access Privé - was told by M6 that it had to tone down any suggestion that Jackson's death was linked to stress caused by rehearsals for his This Is It concerts. This decision was taken because M6 had recently acquired the rights to screen the movie This Is It.

I knew in advance that one of the show's other interviewees was Frank Cascio, but didn't know until I watched it that it also included contributions from Matt Fiddes and Dr Drew. Not the best company to find onself in, some might say, but I have no idea what any of them said because they were all dubbed over by French voice-over artists. 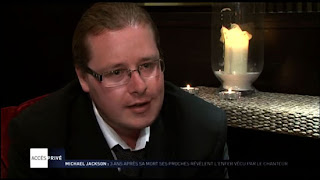 As far as I could make out, I was quoted on Michael Jackson's admission in 1993 that he had developed a painkiller dependency, what my personal interpretation was of the song Morphine, and what I thought about Michael Jackson's condition during the This Is It rehearsals.

My cumulative screentime was something in the region of about two minutes, if that, edited from an hour-long interview. My main concern had been that in cutting sixty minutes down to two, it would have been very easy to misrepresent me, even if unintentionally. Thankfully, it doesn't look like that happened.

Although M6 sent down the order that Spica Production TV should tone down any suggestions that Jackson's death was brought on by his concert rehearsals, journalist Marie Juteau - who had overall responsibility for the report - told me that she refused to cut out a segment about an email This Is It director Kenny Ortega sent to concert promoter Randy Phillips during the rehearsal period. The email was read out during Conrad Murray's manslaughter trial.

In the email, Ortega told Phillips that at rehearsals Jackson was like a 'lost boy'. He said Jackson was 'trembling, rambling and obsessing'. He told Phillips that Jackson should be psychologically evaluated, mentioned 'pulling the plug' and said that those involved had tried using 'tough love' on Jackson but it had not worked. In the final Access Privé report, I was shown speaking about the email and Marie included footage from Murray's trial of Ortega reading it aloud in court.

Besides that, not much to report. This was really just an update to explain why I didn't let people know in advance that it was going to air on Saturday.
Posted by Charles Thomson at 21:12