Huge congratulations to my friend Tony Best, who has unearthed a piece of music history.

In an article for black music journal Wax Poetics, Tony - a writer based in Los Angeles - has managed to secure the inside track on one of the most mythologised unreleased projects in Prince's famous and extensive vault. The vault is rumoured to contain thousands of unreleased songs, dozens of unreleased music videos and several unreleased movies.

Among those movies is an abandoned 1982 project titled 'The Second Coming', which began life as a concert film. Music video director Chuck Statler captured a live concert from the latter portion of Prince's 1982 Controversy Tour. The gig, at the Met Center in Bloomington, Minnesota, was shot on 16mm film and has long been on the 'most wanted' list for Prince's army of dedicated fans.

Prince and his management were equally excited by the concert footage. There was a feeling that it could generate real commercial success. A view was taken that if the live material was intertwined with narrative segments, it might be easier to secure a wide theatrical release. Work commenced on these autobiographical interludes but was later abandoned. The footage has sat unreleased ever since.

For, I think, the first time ever, Tony has convinced Chuck Statler to discuss the project in-depth for publication. But it gets better. He has also persuaded Chuck - who technically owns the footage - to release a number of screengrabs from the film for the first time ever in the 30 years since it was shot. You can read Tony's in-depth interview with Chuck and look at the exclusive movie stills by clicking here and visiting the Wax Poetics website.

The footage is significant for several reasons, the most important being that it is thought to be the only high quality filmed concert from Prince's early career. A number of bootlegs from the era have circulated for many years but are shot by static, rear-of-venue cameras. Chuck Statler spent some time following Prince around on tour before filming, so he could decide on which would be the best angles to shoot from. The footage is an absolutely integral building block of Prince's live videography - the foundation upon which all else was built - but, scandalously, still has yet to receive any sort of public airing.

The earliest Prince performance footage currently on the market is the musical segments in Prince's Oscar-winning movie 'Purple Rain', for which 'The Second Coming' ultimately wound up being a prototype. But while the performances in 'Purple Rain' were staged and lip-synched so they could be shot multiple times from different angles, Chuck Statler managed to capture an entire live gig from Prince's Controversy Tour, raw and untouched. The prospect of such footage one day coming to light has tantalised fans for three decades now.

Prince's next attempt at a concert movie, 'Sign O The Times', was marred by the fact that much of the video and audio - shot across several gigs in the Netherlands in 1987 - turned out to be unusable. As such, a wealth of the footage wound up having to be re-shot or re-dubbed. While 'Sign O The Times' received rave reviews, the need to tamper with the footage to such a degree is a huge regret for many of Prince's fans, who feel the gig lost its energy.

The likelihood of 'The Second Coming' seeing the light of day any time soon is remote. The concert displays Prince's raunchy side, pushing the boundaries of sexuality in music. He performs much of the show in bikini bottoms and suspenders. Since he became a Jehovah's Witness he has distanced himself from this aspect of his earlier career, refusing to play his sexually explicit hits onstage.

However, Tony's piece sheds new light on the much-debated lost movie and the release of the never-before-seen screengrabs is a real scoop.

In a way, I owe my music-writing career to Tony. He spotted me writing online years ago and suggested I contribute some articles to Wax Poetics, which I wound up doing. In fact, when you click to visit Tony's 'Second Coming' exclusive, my first ever Wax Poetics article - an interview with Motown musician Jack Ashford - has somehow found its way onto the related articles menu. My work for Wax Poetics gave me something I could show to editors - a collection of published articles. My projects for WaxPo also gave me the confidence to seek other interviews for other publications, including my own JIVE magazine in 2009.

The video featured groundbreaking special effects and even a spoken word intro by Orson Welles. When Dick Clark screened the film on American Bandstand, he told the audience that he had initially been reluctant to show a music video because he found them boring, but had then watched it and been blown away. Tony and I felt that the video's importance had been overshadowed by the phenomenon of 'Thriller' and set about placing it in its rightful historical context.

The story required us to track down people who had worked on the project - which we did with very limited success. The company which produced the video had since dissolved. Most of the principal players in its production had since died. Of those we did track down, some weren't especially keen to speak to reporters, others had very hazy memories. We did track down one gentleman who was highly involved in the video's mind-blowing special effects, but the project faltered because of a lack of other sources. The story had been intended as a WaxPo feature, but Tony instead wrote a one-page piece about the video for the mag's RE:Discovered section.

When I flew to Los Angeles in the Summer of 2010, I was recognised at my hotel on the morning that Tony was coming to meet me. When the fans I was getting pictures taken with found out that Tony was the author of the WaxPo article, they insisted he be in the pictures too. 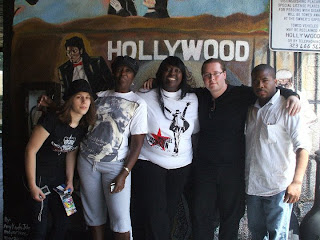 
Tony was a great tour guide, ferrying my friend Angela and I around the city using the underground network, telling us jaw-dropping stories about his years working in the gangster rap industry. I remember stopping at a Barnes & Noble on our travels so I could pick up the latest Jet magazine with Prince on the front cover. He also came with us to Forest Lawn, where Michael Jackson was laid to rest. As we parted ways, he sent us to an awesome record store called Amoeba, where I found a legit copy of Prince's 'Black Album' for a ludicrously low price of about $9.

I messaged Tony on Facebook earlier to tell him what a coup his Prince piece was, but I also felt compelled to post it here too. I really hope you all go and read it. 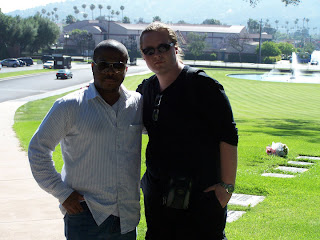