'When Are We Going To Start Being Disobedient?'

A few weeks ago I went to a couple of events at the London Literature Festival. The first was an evening with legendary investigative journalist John Pilger, whose work I have admired ever since I had to write an essay about him when I was studying for my journalism degree.

Pilger's career is now in its sixth decade. His documentary films are some of the most celebrated and respected in all 20th and 21st century journalism. His work on the forgotten victims of the Thalidomide scandal helped secure government compensation for several sufferers who had previously been denied any financial aid. As a war correspondent he has consistently revealed the stories we are never told about our troops' activities in far-flung lands and the devastation they leave behind.

In later years his focus shifted slightly from the atrocities themselves to the media's often biased or simply non-existent coverage of them. Not one to rest on his laurels, he continues to ruffle government feathers. His latest film 'The War You Don't See' - all about the so-called war on terrorism - was banned in the USA.

He appeared on-stage at the Southbank Centre's Queen Elizabeth Hall in conversation with BBC's Robin Denselow. Topics ranged from government censorship to the pointlessness of twitter to the 'heroic' Julian Assange. I wrote a report about the event for the Yellow Advertiser, which I'm now uploading here:


‘When are we going to start being disobedient?’ asks John Pilger 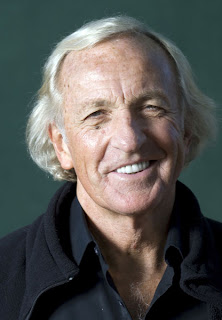 “The institution of so-called mainstream journalism lets people down,” John Pilger said bluntly at the London Literature Festival this week.

For six decades, Pilger’s books, articles and films have revealed the atrocities committed in distant lands by Western governments and the media’s apparent willingness to cover them up.

His most recent film, 2010’s The War You Don’t See, examined Western reporting on the ‘war on terror’ and what the media doesn’t tell us about our troops’ activities.

Perhaps unsurprisingly, it was banned in America.

Interviewed by the BBC’s Robin Denselow before a sold-out audience at the Queen Elizabeth Hall, Pilger said the media is obsessed with immediacy and bombards us with the ephemeral.

“I think we have two goals” he said of the media’s role in society. “One is to do as best we can to try and find out what the hell is going on: ie. Truth.

“Two, I think our job is to call those in charge of so much of our lives to account – and we don’t.”

Part of the problem is the ‘cosy relationship’ between journalists and politicians, he argued – and this stems from budding reporters being taught to seek information from official sources.

“It’s certainly something that those who teach journalists should think about,” he said. “Even the academic side to journalism perpetuates this idea that there is simply a narrow form of journalism and that the main source for journalism comes from above, not from below.

Pilger said this mindset was obvious in the coverage of the Iraq War.

He complained that almost all media outlets had wound up perpetuating the ‘demonstrably made-up’ story about the existence of WMDS because they had fallen into the common journalistic trap of seeking information from ‘authoritative’ sources.

BBC man Robin Denselow attracted Pilger’s ire by suggested that the expensiveness of investigative journalism is a complicating factor.

“Investigations don’t cost a fraction of, say, the Human Resources staff at the BBC,” Pilger retorted, “and the scandal of the management of the BBC and their Bob Diamond impulses. That should all be going into investigative journalism.”

A ‘seismic shift’ is needed in journalism, Pilger continued: “We need a fifth estate – not a fourth estate anymore – in which we stop thinking that journalism that is beholden to the State or to the Corporate State is independent. It isn’t. It’s an extension.”

However, Pilger did not offer any suggestion as to how journalists working independently of the State or the Corporate State might fund their investigations.

Julian Assange was about the only media figure to escape Pilger’s wrath.

Describing Assange’s Wikileaks releases as ‘almost heroic’, Pilger accused the media of turning on him.

“It arrived with scoop after scoop after scoop, telling us what we should have been told by investigative journalists and current affairs programmes... That’s one of the reasons, in my view, that Wikileaks caused so much angst and anger amongst mainstream journalists. Because it shamed journalism. It went into areas that journalists had let alone.

“I think what we’ve had is a kind of malevolent Greek chorus about Julian Assange. I think the coverage of Assange is one of the great stains on journalism. You only have to read the truly malign, almost malignant, tweets from well-known journalists. I suppose that’s the value of Twitter, isn’t it? Because out pops what they really want to say.”

Overall, Pilger isn’t especially impressed by social networking sites. Their contribution to journalism, he said, had been ‘utterly exaggerated’.

“Does it help us to make sense of things?” he asked. “I think that’s what’s missing. We’re bombarded by the ephemeral. There’s an avalanche of it.”

Twitter, he said, is just another example of the media’s growing obsession with immediacy – an obsession which breeds homogeny and robs reporting of any real depth or insight.

“I’m so pleased I had nothing to do with the constant voice in your ear when you’re in Baghdad or somewhere else,” he said of his own TV career. “You’re on duty 24 hours a day and you’re being forced to keep something going but there’s no time gap. There’s no time for reflection on what you’ve seen.

“I don’t think that leaves them anywhere to go but to the press conference. To follow where everyone else is going – to cover themselves. You’ve got to cover what the competition is doing.”

For all his complaints about journalism’s current state, Pilger said he wasn’t depressed about its future – because as long as young journalists understand the industry’s problems, they can work around them.

He explained: “The advent of young journalists understanding [the problems], but not giving up on journalism; Learning to navigate their way through systems and challenging systems if that’s possible in these economically strapped times – I think that’s very, very encouraging.”

There is no greater job, he said, than being a reporter.

“I believe very strongly in being a reporter,” he told the crowd, “and being a witness. I think that sense of being a reporter is something that I have always been proud to be – because it’s such a privilege. People allowing you into their homes, trusting you and telling you their stories.”

The event closed with an audience question about the lack of public protest in these turbulent times.

“What has happened to protest?” the audience member asked. “Why are the numbers so low? Where the hell is everyone?”

“I ask that question myself,” Pilger replied. “But it still can happen and it can happen in a mass sense. In those countries where it can’t happen, it does happen – and we should draw inspiration from them.”

He recalled that American activist Howard Zinn once said, "It's not mass civil disobedience that is the problem. It's mass civil obedience."

Before the lights went up, Pilger asked the audience: "When are we going to start being disobedient?" 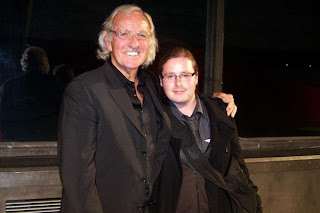 Charles Thomson and John Pilger at the London Literature Festival.

An edited audio recording of John Pilger in conversation is available for download on the London Literature Festival website.
Posted by Charles Thomson at 23:01