Reflections on the Michael Jackson Trial - Thomas Mesereau, 10 Years On

I was recently contacted by my friends Jamon and Q, who run a Michael Jackson podcast from Australia - The MJCast. Launched this year, the show has already amassed a sizable fanbase, which includes former Savage Garden singer Darren Hayes, who recently volunteered his services as a guest, in an episode to be released in the coming weeks.

Jamon and Q wanted to record a special edition of the show to mark the 10th anniversary of the unanimous not guilty verdicts in the Michael Jackson trial and they knew exactly who they wanted to interview - Tom Mesereau.

Even before the Michael Jackson trial, Tom Mesereau was one of the most respected and decorated lawyers in America, known for his dedication to pro bono work - running free legal clinics and trying death penalty cases in the Deep South for no fee - as well as his skillful defences of high profile clients. Of course, the Michael Jackson trial - the most widely covered trial in world history - catapulted him to a whole new level of prominence and prestige.

He remains a busy and successful advocate, having so far this year secured an acquittal in a mortgage fraud case (his third consecutive victory in federal court) and hung the jury in a pro bono capital murder case in Alabama. Since then he has signed up to represent Suge Knight, who stands accused of murder and robbery. 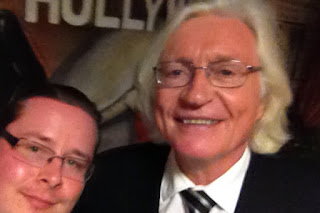 A quasi-successful attempted selfie by Tom and I in Hollywood, November 2014.

Jamon and Q invited me to guest host the show, which I was honoured to do, and I set about trying to secure Tom's involvement. I was able to schedule a conference (not easy, coordinating mutually agreeable times in British, American and two Australian time zones!)  and to our delight, Tom told us when he came on the line that he would stay for as long as we wanted and answer anything we asked.

That show was uploaded today, with no prior announcement, as a surprise gift for the MJCast's listeners, 10 years exactly since Michael Jackson was exonerated. In it, Tom discusses his background, how he came to be involved in the Jackson trial, the tactics he used to win it, and how he thinks it is remembered today and will be remembered in the future.

It was a pleasure to take part and I hope you all enjoy it.


Click here to listen to the show.
Posted by Charles Thomson at 12:28