In addition to the huge amount of messages I received today about yesterday's blog entry, there were also some unexpected messages about another article I wrote back in 2010. I spotted fans were tweeting me about Michael Jackson's final music video 'One More Chance'. They reminded me that today - November 17 - is the 10th anniversary of the video shoot, which was abandoned halfway through, due to the infamous Neverland raid on November 18, 2003.

I told the story of the short film's creation and ruination three years ago, when the unfinished video was included in a DVD box set. The article was published on US news website Sawf News, which I recently learned has since been closed down. However, a copy is available on my website. 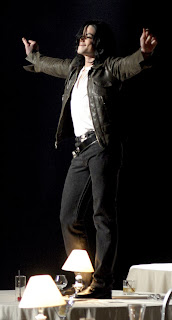 Click here to read my exclusive article about the making of 'One More Chance'
Posted by Charles Thomson at 01:02