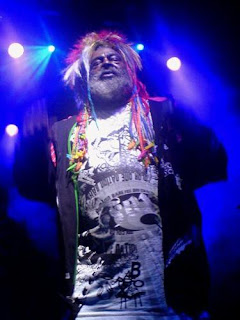 
"Do a search for the greatest rock bands of all time and you won't see mention of Parliament-Funkadelic. I know that rock critics like to fight over whether the Rolling Stones or the Beatles deserve the number one spot but in my eyes neither of them can hold a candle to what P-Funk brought to the music. As far as I'm concerned, P-Funk rocked harder than all of them combined... It's funny that the greatest rock group is always assumed to be white."André Torres - Editor-in-Chief, Wax Poetics


News of George Clinton's hospitalisation shocked music lovers around the world this week but perhaps none more so than me, for the hospitalisation came just days after I enjoyed a 75-minute interview with George, during which he seemed to be perfectly fine.

Alarm bells sounded among funk fans after Bootsy Collins reported the news on his facebook page and asked his followers to pray for George Clinton's recovery. Fortunately the hospitalisation wasn't too serious - a staph infection was discovered in George's leg as he underwent a routine check-up. He's already checked out and is now busy preparing to embark on yet another international concert tour.

The level of media interest was surprising given that George Clinton is one of the most unsung music pioneers still walking among us. Fusing the hard funk of James Brown with the psychedelic edge of Sly and the Family Stone and the blistering rock of Jimi Hendrix, George and his group Parliament-Funkadelic cultivated a groundbreaking sound.

According to Rolling Stone their output, which "[mixed] funk polyrhythms, psychedelic guitar, jazzy horns [and] vocal-group harmonies" was "some of pop's most adventurous music of the Seventies." Their unique sound ultimately laid the foundations for much of the hip-hop that now dominates the musical landscape.

Despite achieving three platinum albums, Parliament-Funkadelic never quite reached chart blockbuster status. Nonetheless, their danceable beats and affirmative lyrics resonated with a huge audience and today they're considered one of the most influential groups of the last century.

Flourishing in the early 1970s, P-Funk's music was often laced with political commentary but delivered it in a far less divisive way than 1960s protest songs like James Brown's 'Say It Loud, I'm Black And I'm Proud'. Instead the tunes often focused on music as a uniting factor. P-Funk sang of 'One Nation Under A Groove'. Music could make barriers melt away into insignificance; 'Free Your Mind And Your Ass Will Follow' read their 1970 album cover.

Even the compositions were about unity. When Bootsy Collins migrated to P-Funk from James Brown's revue he brought with him the concept of 'the one': the one-and-three beat Brown popularised during the 1960s and early 1970s. "When everybody's playing it in unison instead of harmony, it's as one," George said in 2010. "That's strong... It's in unison so it's like it'll be around forever. It's in your genes... Then we're all together as one... The entity of one as a life form - as life. One DNA. I'm for you, you for me. We for trees and we for the planet."

In a stroke of genius, Clinton devised a distinct, space-age image with which the band's music became synonymous. Dressed in otherworldly costumes and starring in comic strips on their album artwork, the group presented themselves as a band of black superheroes - an empowering and cutting edge move so far ahead of its time, in fact, that we're now halfway into 2011 and there's still never been a major movie about a black superhero (bar Hancock, in which the black superhero was an inept drunkard).

By fusing searing social commentary with radio-friendly grooves and comic book imagery, Clinton and his band were able to rail against social ills in a non-threatening way. Clinton's ideology crept past the same DJs who dropped James Brown from their playlists when he released 'Say It Loud'. 'Cosmic Slop' became a club smash, filling dancefloors all over America, despite telling the story of a woman who becomes a prostitute to feed her children.

Combining their pioneering funk-rock fusion and their distinctive visual presentation, P-Funk enjoyed enormous success as a touring act, selling out stadiums throughout the 1970s with an elaborate concert experience in which Clinton would descend in a million-dollar spaceship to bestow the gift of funk upon his audience. That spaceship - the mothership - has now been acquired by the Smithsonian.

Often dismissed as clownish figures at the height of their fame, in more recent years George Clinton and P-Funk have been acknowledged as some of the most respected and influential musicians of all time. From Prince to the Red Hot Chilli Peppers (who recruited George in 1985 to produce and write for their album 'Freaky Styley') a lot of the biggest acts to have emerged since the early 1980s have cited P-Funk as one of their greatest influences. In 1997 the group was inducted into the Rock and Roll Hall of Fame and in 2009 George was handed the BMI Icon Award.

P-Funk's influence on several generations of hip-hop musicians is self-evident in the number of times their music has been sampled, which runs into the thousands. In fact, P-Funk are thought to be the second most sampled act of all time, beaten only by James Brown. Academic Vladimir Gutkovich has described them as "the key predecessor of hip-hop music."

Indeed, there is a very strong argument to be made that George and P-Funk have had more impact on the contemporary musical landscape than even the Beatles. Wax Poetics editor André Torres wrote in 2006:

"While most critics want to put the holy trinity [Beatles, Stones, Zeppelin] on a pedestal, with the world domination of hip-hop culture and the large role that P-Funk has played in the sound of hip-hop, I dare say that P-Funk's impact can be felt much more strongly thirty years later than that of those three bands. When I asked Dr Dre, the quintessential post-modern producer who has changed the course of pop music three times in two decades, who he listened to growing up and was his biggest influence, he said P-Funk. Not the Beatles."

Presently, though, George is troubled. While his pioneering music continues to form the basis for so much contemporary output, he's getting the props but he's not getting the cash. Like many black musicians of his era, he was hoodwinked by the very music industry figures who were supposed to be looking out for his best interests.

George's financial problems began in the 1980s and have continued on-and-off ever since. In 2005 a court ruled that a man called Armen Boladian had forged George's signature on numerous documents in order to falsely assert ownership of some of George's masters. The masters in question were returned to George but Boladian still controls much of the P-Funk catalogue and George contests his ownership of those masters too.

George's investigations into the corporate skullduggery around him and his music have turned up what could be one of the biggest known conspiracies in the history of the music business. His losses over the last 25 years or so could total as much as $100million. Just one sample can be worth hundreds of thousands of dollars and George is one of the most sampled artists in music history. For more than two decades artists have been paying for the rights to sample his work and that money has been landing straight into other people's bank accounts. But the injustice doesn't even end there.

His albums hop labels when he's not looking. At an album signing a few years ago a fan handed him a CD he'd released on Sony and he noticed that instead of saying 'Sony' on the artwork, it said 'Westbound'. He'd never sanctioned nor profited from this apparent re-release. Somebody else was getting paid for it. There's more, too.

Type George's name into iTunes and you'll notice that a lot of his tracks show up as having been written by 'George S. Clinton'. That's not George Clinton. Every time you buy one of those tracks, somebody else gets paid for it.

During a recent trip to the US Copyright Office, arranged by Congresswoman Sheila Jackson Lee, George discovered documents showing that his songs had been repeatedly re-registered without his knowledge or permission, with original songwriters missing and new songwriters added.

Deceased P-Funk members' catalogues had been re-registered as though they were still alive, years after they passed away. At one point somebody went to NYC to re-register George's entire catalogue in one hit. George has even obtained a signed declaration from a man who says he was paid thousands of dollars to pretend he'd written some of George's material.

George's legal disputes are ongoing with no resolution in sight. The scale of the battle facing George is almost beyond comprehension. It could take years to unpick - meanwhile, other people continue to profit from his record sales and samples.

Outside of this troubling issue, though, George remains upbeat. At 69-years-old, he is appalled by the mere mention of retirement. He plays roughly 200 gigs every year and is horrified by the idea of stopping. He loves gigging and the proceeds allow him to pursue his often overlooked humanitarian efforts. Just last year he was involved in fundraising efforts for Haiti and donated 25% of all future P-Funk royalties to the Barrack Obama Green Charter High School in his home town of Plainfield, New Jersey.

During our interview we also covered more emotional topics. In the last year and a half he has lost his son and his mother, as well as P-Funk bandmates Garry Shider and Phelps 'Catfish' Collins. He told me how getting onstage 200 nights a year and spreading his positive message helps him to cope with the loss. He also spoke candidly about the aging process, his periods of drug abuse and checking into rehab with Sly Stone, with whom he's recently been in the studio working on new music.

There was more positive chat, too, including discussion of a planned Motown album and a flash drive in the shape of George's hand, the finger of which will plug into your home computer giving access to almost every track the group has ever recorded, including demos and live recordings.

Despite this week's health scare, George is still very much alive and kicking. He works constantly in the studio down the street from his home and is about to embark on a grueling concert tour around America and Europe. These aren't rigid, untaxing oldies gigs either. P-Funk gigs are perhaps the best value for money around. George and the band routinely play for three hours or more and the shows often consist of long improvisations. No two gigs are the same.

In the background George is relentlessly pursuing years of unpaid royalties for himself and his P-Funk collaborators as well as restored ownership of his masters. He also intends to start a legal fund for artists facing similar copyright problems and has agreed to give lessons at the Barrack Obama Green Charter High School, teaching music students how to avoid getting ripped off in the same way. So fear not, funkateers - it's going to take a lot more than a staph infection to slow him down.

For news on the publication of my interview with George Clinton, keep an eye on my blog. For details of George's upcoming gigs, click here. 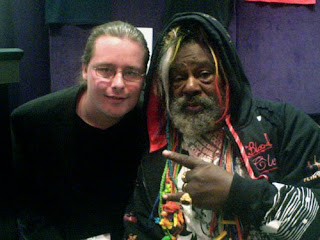