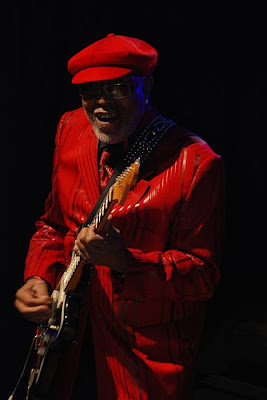 R.I.P Phelps 'Catfish' Collins, 1944-2010
(Photo: Flickriver)
I learned today from my friend Tony Wilson that Phelps Collins, the legendary James Brown and P-Funk guitarist, passed away earlier this month.
Phelps, best known as Catfish, passed away on August 6th after a battle with cancer. His death came while I was on vacation in Cyprus with scant internet access and so passed me by. It was with great sadness that I learned today, several weeks later, of his death.
Catfish Collins is a legend in the world of funk music. His stint playing guitar for James Brown was short but prolific. Alongside his brother, bassist Bootsy Collins, Catfish worked with Brown for only 11 months between 1970-1971. However, during that time he played many of the most famous funk guitar riffs of all time, working on tracks such as Sex Machine, Super Bad, Soul Power and Talkin' Loud and Sayin' Nothin'. 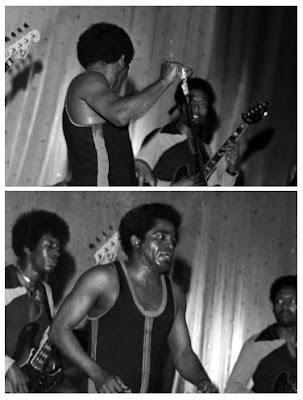 I met Catfish briefly at London's Cumberland Hotel in 2008 while he was on a rare tour with his brother, paying tribute to the late, great Godfather of Soul. While waiting for an interview with Bootsy that never materialised - a long story for another time - I chatted to Catfish about life on the road. He complained that he'd never really enjoyed touring and was sick of living out of a suitcase. This would be his last tour, he said.

My friend Ron Roelofsen, a James Brown archivist, met Catfish at another stop on the same tour and had much the same conversation. "I had the honour to meet [Catfish] in person in 2008 during the JB tribute tour in Holland and Belgium," Ron wrote on his website after hearing the sad news. "A very nice and also funny guy. I never forgot his answer to my question, 'What have you been doing for the last 30 years?' Catfish: 'Fishing'. 'And is there a chance that you will be making some new music again after this tour?' 'No, I go back fishing.'"

In losing Catfish we have lost one of the architects of funk music. Despite the brevity of his time with James Brown and Funkadelic, he leaves behind a tremendous legacy. James Brown is famously the most sampled artist of all time, but little credit is given to the musicians playing in those samples. Catfish is one of the most (if not the most) sampled guitarists in the history of recorded music. Long may his music live on.

Bootsy Collins is hosting a tribute concert for his brother on September 4th at the Madison Theater in Covington, Kentucky. For details and tickets, click here.
Posted by Charles Thomson at 02:05