After discovering yesterday that one individual was impersonating me on TMZ, I discovered that another was writing inaccurate articles about me for consumption by thousands of vulnerable and impressionable fans.

Bonnie Cox, author of the 'Michael's Guardian' blog, has recently published two inaccurate and defamatory articles about me and has alluded on her twitter page to the fact that she's planning a third.

Cox, a supporter of the Tea Party movement who last year wrote on her facebook page that she hoped President Obama would get on a plane with one of his 'muslim buddies' and crash, insists on her blog that Michael Jackson was murdered by Sony, 'This Is It' is full of body doubles and Jackson's friends are being murdered to disguise the truth about his death.

Among the brainless witterings on her blog, she baselessly accuses me of authoring 'false' blogs about Michael Jackson, suggests that I am only covering him positively for my own financial gain and implies that my friendship with J Randy Taraborrelli is part of a Sony conspiracy to destroy Michael Jackson.

She later sent me a message via twitter implying that there was something shady about my friendship with Taraborrelli, saying, "I have a photo of you and Taraborrelli together. How am I supposed to deal with that?"

The notion that a photograph of myself and J Randy Taraborrelli is evidence of a conspiracy is laughable. I have made no secret of my friendship with Randy Taraborrelli and nor has he. We had dinner together in LA several weeks ago and both posted the pictures on our facebook pages. I'm not ashamed of our friendship and nor should I be. Taraborrelli is a kind, warm, funny and generous man, and any implication that he's part of a conspiracy to destroy Michael Jackson is beyond absurd. The idea that a photograph of us together would evidence any shady conspiracy or subterfuge, or would be of any interest to Cox's readers, is insane. 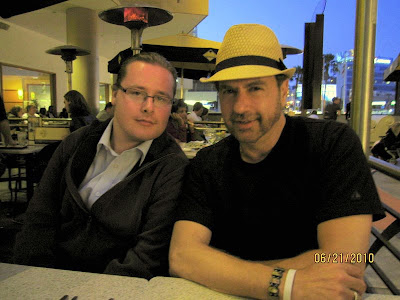 Randy Taraborrelli and I in Los Angeles.


Cox has since threatened me indirectly via twitter, writing a message that I'm 'not going to like tomorrow's blog', so apparently her next entry will be filled with even more deluded nonsense.
Cox, by her own admission, only began writing about Jackson after his death. I, meanwhile, have a documented history of Jackson-related journalism stretching back at least as far as 2008. Ironic, then, that Cox should accuse me of being the bandwagon jumper.

Her inexperience shows, too. Among her 'evidence' of Randy Taraborrelli's anti-Jackson agenda she cites Bob Jones's tell-all book about Michael Jackson. That would be Bob Jones who admitted on the stand during Jackson's trial that his book contained fabricated information, such as false claims that he witnessed Jackson licking the head of a young boy.

Cox also neglects to mention that in a series of tape-recorded telephone conversations between Jackson and a female friend, known as the 'Glenda Tapes', Jackson name-checks Taraborrelli's book and confirms its accuracy.

A final word: The idea that I have only started writing in Jackson's defence since he died and it became profitable is easily disproven by this 2008 interview I conducted with Aphrodite Jones about her book 'Michael Jackson Conspiracy'.

As for the idea that I am benefitting financially from my articles about Jackson's media treatment, my work on the Michael Jackson case has been conducted largely at my own expense. My most recent Huffington Post article, 'One of the Most Shameful Episodes in Journalistic History', took a month to research and is over 5000 words long. I was not paid for any of my research or writing on that piece. I wrote it because I am passionate about the cause and believe the injustice needs to be highlighted.
Quite how my willingness to spend one month doing unpaid research and writing on a pro-Michael Jackson article ties in with the theory that I'm part of a Sony-controlled anti-Michael Jackson conspiracy, I'm not sure. You'll have to direct that question to Bonnie Cox.
Posted by Charles Thomson at 13:19