How the Godfather of Soul won me a Guardian Award

Charles Thomson, award winning writer. That's how I shall be billing myself from now on.

On Wednesday evening I received a prestigious Guardian Award for my work on the late, great Godfather of Soul, James Brown.

The Guardian ceremony is the biggest and the most respected awards bash for young journalists in Britain. I was nominated back in September for 'Feature Writer of the Year'. The ceremony took place on Wednesday evening at the Proud Gallery in Camden.

But then something unexpected happened. Colin Murray, our host for the evening, announced that this year the judges had changed the format of the feature writing category. There was one particular article that the judges felt needed to be recognised, he continued. The room was abuzz with chatter. Over the noise, I heard Murray say something about James Brown - and almost fell off of my chair.

In what has now become a blur, I was presented with the special commendation award for feature writing. As such, I shall be swanning up to London at some point in the near future for a week of shifts at the Guardian.

It was an honour to receive my first journalistic award for a piece about James Brown. When I was 18 years old and just starting out, James Brown was the first artist who gave me a chance. He allowed me backstage at what would become his final concert on British soil. He let me put a question to him during his pre-show press conference and he put me on his personal guestlist for the concert.

Two months later he died. My question to him in London had been about an album he was working on. As time went by, I began wondering what had happened to it and why it was never released.

So I decided to find out. I tracked down everybody I could who was involved in the recording process; band members, session musicians, studio owners and engineers, backing vocalists, songwriters and managers. What emerged was an insight into the final two years of James Brown's life; the recording, the touring, the ill health and ultimately, his death.

To say that the article was a labour of love would be an understatement. From my first interview - which took place in London with the legendary Fred Wesley - to the article's eventual publication, the process took over a year. My work on the piece during that year was stop-start; sources had to be tracked down and then interviews had to be scheduled. Investigating the final two years of James Brown's life proved an expensive hobby too, what with all the lengthy transatlantic telephone interviews.

I would like to take this opportunity to thank all of those who consented to interview - this is your story and I am privileged that you allowed me to tell it. Thank you to the judges - this article is the most significant that I have written and to have it acknowledged by the Guardian Awards is surreal.

And thank you to Mr Brown, who has book-ended this first chapter in my journalistic career. At 18, just weeks into my journalism degree, Mr Brown became my first high profile interviewee. At 21, the award which drew a line under my academic career was presented to me for an article inspired by that meeting with James Brown. 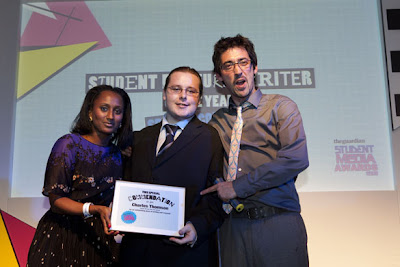 Posted by Charles Thomson at 00:44