Walking the red carpet with the men who stare at goats

It's not every day that you walk past George Clooney and it's even rarer that you do so on the red carpet at a film premiere. But as of this week I can consider both boxes ticked.

On Thursday night Clooney's latest offering debuted in Leicester Square on day two of the Times BFI London Film Festival. The Times Gala screening of 'The Men Who Stare at Goats' was the hottest ticket in town and I was lucky enough to have a pair.

Based on Jon Ronson's non-fiction book of the same name, the film tells the tale of the US government's preoccupation with teaching factions of its military to master psychic abilities.

The gala was a glitzy affair. Photographers and TV crews lined one side of the red carpet and screaming fans lined the other. Ticketholders were ushered through Leicester Square's famous garden (closed to the public for the evening) and into the middle of the hysteria. Surrounded by flashbulbs, autograph pads and dangerous looking security guards it was a surreal experience to walk past the cast and crew as they gave live interviews. Somewhere in the world I have now shared a screen with George Clooney, however briefly.

At 7pm Clooney took the stage with director Grant Heslov, producer Paul Lister, author Jon Ronson and screenwriter Peter Straughan. The actor addressed the audience, which included John Hurt, Neve Campbell, Damian Lewis and 'Shaun of the Dead' director Edgar Wright, who is rumoured to be directing a film adaptation of Ronson's first book 'Them: Adventures with Extremists'.

"As well as being a wonderful book," Clooney told the crowd, "this screenplay was considered one of the best screenplays not to be made into a movie for a long period of time."

Starring Ewan McGregor as a fledgling reporter fleeing a failed marriage, the film is not a particularly faithful adaptation of Ronson's book. However, this was to be expected. Journalism tends not to translate well to the silver screen. Writing a book like 'The Men Who Stare At Goats' would have been a long and arduous task involving months, if not years, of painstaking research. As a narrative arc, a journalist leafing endlessly through piles of documents is unlikely to set the box office on fire.

Perhaps the biggest deviation from the book is that McGregor's character, Bob Wilton, is desperate to enter Iraq and become a war correspondent, whereas Ronson actively avoided the country. The first time I met Jon Ronson was when I invited him to deliver a guest lecture at my university, during which he spoke about his reasons for not going to Iraq. "This was 2003," he said. "The insurgency was just beginning. My son was five years old."

On his travels Wilton encounters Lyn Cassady, a former psychic spy. In a show-stealing performance from George Clooney, Cassady wears the maniacal grin of a man constantly on the verge of a breakdown. Hilarious and unnerving in equal measure, Clooney plays Cassady with the naivety and conviction of Buzz Lightyear in his first outing; a man utterly convinced of his own psychic abilities in the face of what seems like overwhelming evidence to the contrary.

Cassady is an amalgamation of several psychic spies who feature in Ronson's book and while he is a fictional character the stories he tells of soldiers trying to become invisible, walk through walls and kill animals just by staring at them are true and lifted directly from Ronson's original text.

Elsewhere, Jeff Bridges is endearing as Bill Django, a hippie soldier modelled closely on Jim Channon, the Lieutenant Colonel behind the 'First Earth Battalion Manual', a tome urging soldiers to win wars through peace and love rather than combat. The juxtaposition of Django's wide-eyed enthusiasm with the rigidity of his seniors is a constant source of humour.

Kevin Spacey also appears as slimy soldier Larry Hooper, a sour-faced perpetual bonfire pisser. The only central character not based on a real person, Hooper is a thorn in the side of Cassady and Django and viewers will relish watching him get his comeuppance.

'The Men Who Stare at Goats' is a fast-paced, Coen-esque feature that expertly delivers action, pathos and pure comedy. Quality source material, a snappy script, strong direction and a fantastic cast come together to create what is surely one of this year's must see films. Eliciting belly laughs for the entirety of its 90 minute running time, it was certainly a hit with Thursday night's audience.

The Men Who Stare at Goats is released nationwide on Friday 6th November. 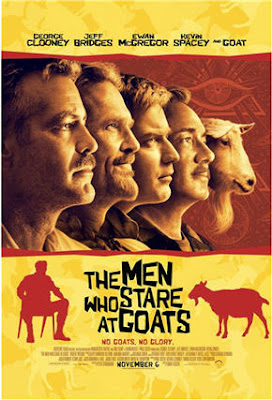 Posted by Charles Thomson at 02:40