Last year my friends Jamon and Q, hosts of The MJCast - a podcast about all things Michael Jackson - invited me to co-host a special episode of their show. It was ten years since Jackson had walked free from court after being acquitted of all charges in his 2005 trial and to mark the occasion we conducted an extensive interview with his lead counsel, Tom Mesereau. (You can listen to that show by clicking here.)

We had a blast recording the show and it went down a storm with the listeners, so last week we came together again to record another anniversary episode for 'Vindication Day'. This time around we decided to interview an often overlooked member of the defence team but one who Mesereau has often told me was integral to the victory.

During an interview that lasted almost three hours he was frank and funny in equal measure, describing how he set about demolishing the case against Jackson, his thoughts on various members of the defence team, his opinions of certain reporters who covered the case and some shocking discoveries he made about the way police had handled the investigation. Scott hasn't spoken much about the case and much of what he told us will be brand new, I suspect, to the majority of listeners. We certainly hope they have as much fun listening to it as we did recording it. 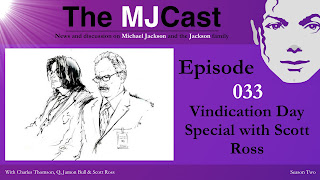 NB: The first ten minutes invlude some loud background noise, which is entirely my fault. Jamon, Q and I all live many miles apart so we record remotely, communicating during the recording sessions via an instant messaging system; adding questions to our loose 'script', cutting others out, and so on. The golden rule is to mute your microphone when typing those messages and I forgot to do that, so I apologise for my ridiculously loud, intermittent key-punching. Otherwise, I hope you enjoy the show.
Posted by Charles Thomson at 21:06