The allure of the large, outdoor music festival has always eluded me. The few sprawling, open-air gigs I've been to over the years have been rather soulless affairs. The sound is often poor and most of the audience end up watching on TV screens because they can't get anywhere near the stage.

Atmosphere has always been curiously lacking. The visceral experience of a live gig is lost in the expanse of the setting - any funk or soul which may be emanating from the stage seems to just sort of waft away into the sky before it ever reaches anybody beyond about the first 10 rows. Beyond that invisible barrier, the only people having a good time usually appear to be off their faces on drink, drugs or both. My ethos is, and always has been, that if the gig is so crappy you have to be on drugs to enjoy it, why bother going?

Bootsy Collins' road manager had me admitted to the O2 Wireless festival for free in 2008, when Bootsy performed there on his James Brown tribute tour. I only lasted a few hours. I was surrounded by ridiculous hipsters, sporting bow-ties and fluorescent plastic sunglasses frames with no lenses in, and quickly tired of being constantly offered pills by tweaking ravers.

The thought of stretching that experience across two days, adding into the mix a complete lack of showers and only a few hundred increasingly grim portable toilets for comfort, is pretty much my idea of hell.

It is for this reason that despite living only 25 minutes from V Festival - an enormous, two-day, outdoor event which is screened every year on Channel 4 - I have never even considered going. The line-up has never excited me, the tickets are incredibly expensive and the entire thing just sounded exhausting.

It was an amusing twist of fate, therefore, that this year I was awarded a V Festival press pass. It was one of seven that was allocated to my newspaper after it agreed to publish a 12-page commemorative pull-out about the event. I had to think long and hard about whether or not I wanted to go. I was leaning towards 'not', but my editor was proposing a fantastic journalistic exercise; a photographer covering every act on the main stage and six reporters roving around the event, interviewing crowd members, reviewing acts, collecting amusing news items and blogging about their firsthand experiences. I told him that if he needed me there, I would be there.

To recount the entire weekend would take a lot of time and a lot of words. What I will say is this: It was an eye-opener. Our press passes gave us almost complete access to the festival; the right to use staff entrances and exits, free entry to a garden full of celebrities, and a fleet of airport buggies to ferry us wherever we wanted to go. Despite this, it was about as unglamorous an experience as you could imagine (even if we did have our own luxury toilets).

Being backstage gave us almost zero access to celebrities, but full knowledge of all their ridiculous diva demands. For instance, Beyoncé - upset by some unflattering pictures taken of her at the Superbowl - banned all photographers from taking pictures in front of the stage (the only act across the entire two-day, five-stage festival to make such a demand) and forced them to take pictures from about 100 yards away. She - along with Jessie J - also forced photographers to sign away the syndication rights to all of their photographs, preventing them from earning any money from their own work.

A band called The Heavy demanded that their agent personally approve every single picture taken during their performance before they could be published. Photographers boycotted them as a result, meaning they got no coverage at all - so it's fair to say that particular celebrity whinge backfired somewhat. Elsewhere, nobody was allowed to move (literally) in the backstage area when Beyoncé decided to leave her dressing room - and journalists were told off in a press area for looking at UK pop singer Olly Murs.

I documented much of this insanity in a pair of blog posts. In the first, I described almost being injured in a dangerous crush ahead of Beyoncé's performance. I was compelled to write the piece after witnessing dozens of fans being pulled from the squeeze either in tears or barely conscious. In my personal opinion, unless organisers find some way to prevent this from happening in years to come, it is only a matter of time until somebody is seriously injured.

In the second blog post, I recounted the farcical incident in which I and other journalists were reprimanded for looking at singer Olly Murs in the Media Garden.

After the crush on the first night, I swore I would never return. My stance has since softened slightly, although if I do ever go back, it certainly won't be as a paying customer (caveats, such as a headline slot by Prince, may apply).

At the end of the second day, my news editor asked me what had been my festival highlight. I really struggled to think of anything. I had enjoyed some acts - The Stereophonics, Laura Mvula - but none had left me especially excited and overall, it had been an exhausting and slightly disturbing experience.

Then, it suddenly came to me; my highlight had been writing about it. For all the craziness - the frustration at the celebrities' outrageous demands, the dangerous crushing in the crowds, the audience teeming with drunken and possibly drugged lunatics - it had been fantastic to have that unique combination; enough access to know about the backstage madness and enough freedom to write about it. Traditional media outlets never write about that stuff. They're scared to be critical in case they jeopardise their access to free tickets the following year. I, conversely, didn't give two hoots whether I was ever invited back again, so I laid it all out for the reader; showed them - as we later coined it in the news room - 'The V You Don't See'. I got a lot of comments on Facebook and Twitter which suggested to me that people had enjoyed reading about the hidden side of music festivals and what it's really like backstage.

If I do go back next year, it will be with a view to producing more of the same.

I took a lot of photos at the festival, which didn't get used anywhere - so this blog is going to serve as a sort of V Festival Scrapbook. Enjoy.

The Calm Before The Storm 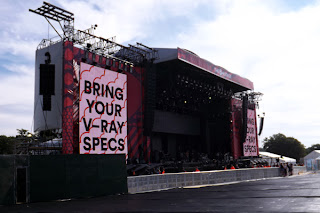 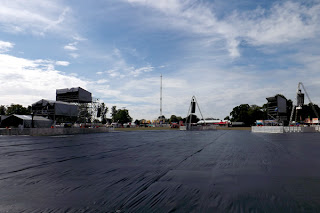 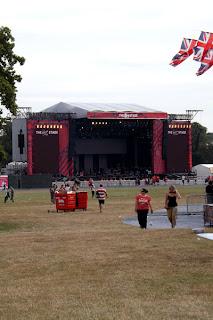 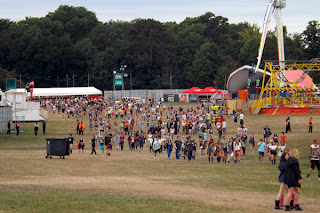 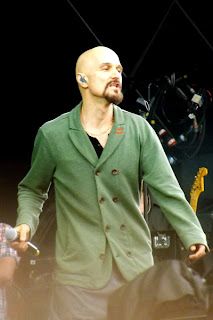 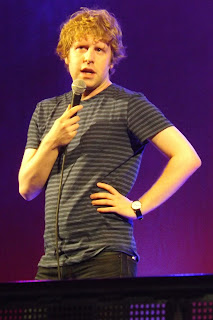 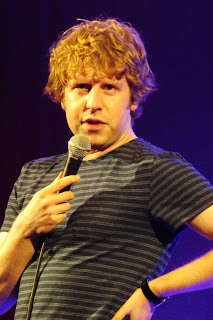 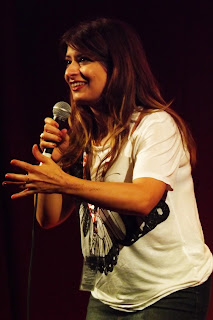 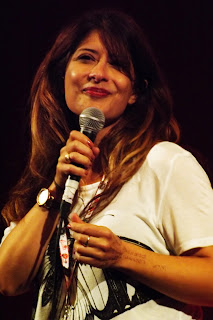 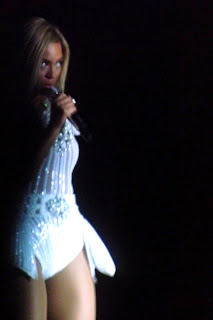 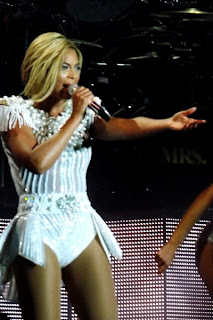 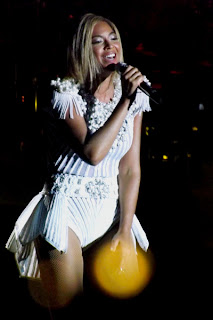 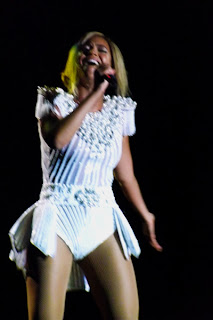 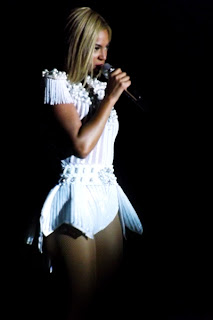 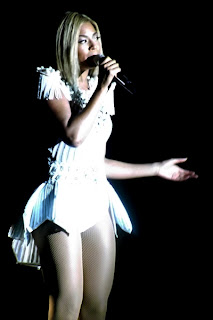 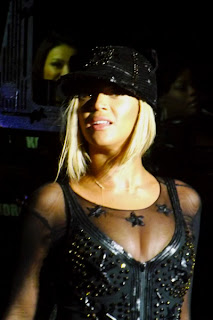 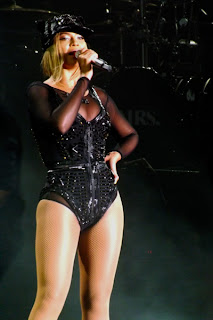 Seasick Steve and Olly Murs spotted in the Media Garden 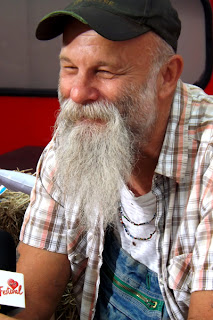 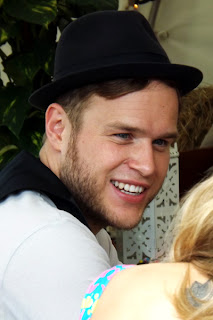 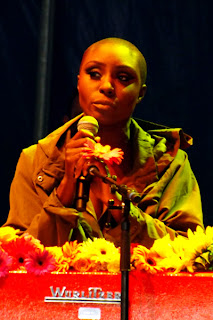 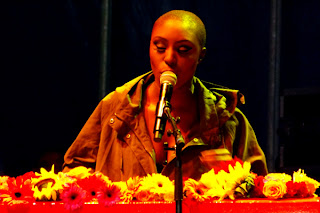 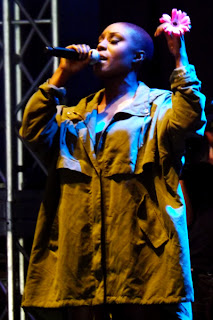 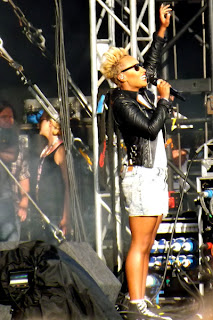 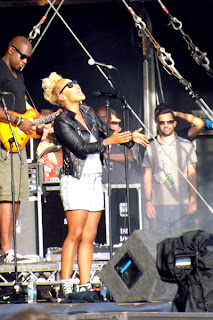 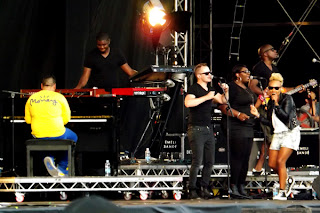 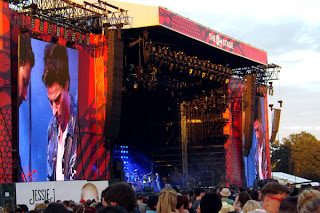 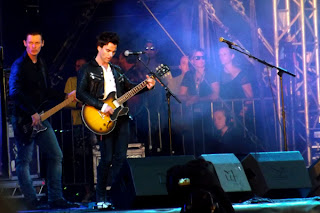 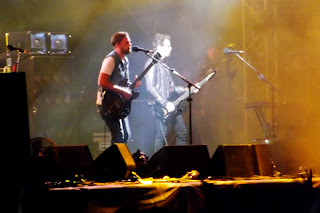 Posted by Charles Thomson at 23:21