Tomorrow I will appear on King Jordan's radio show in New York (via telephone, alas) to discuss Michael Jackson. I imagine last week's ludicrous story in the People will be a hot topic. You can stream the show online for free at this link at 10pm UK time / 5pm NY time.

Incidentally, CNN has published a report on the People's story, calling its credibility into question. A positive step but one which, unsurprisingly, has not sparked the same global copy/paste frenzy that the original, bogus story generated.

Meanwhile, the Mirror - the People's sister newspaper - appeared on Thursday to be trying to wash its hands of the story. After becoming involved in a chain of tweets sent to me by Michael Jackson's nephew Taj and some Jackson fans, the newspaper's Twitter author published a seemingly confused tweet claiming the story was nothing to do with the Mirror and they had no idea why they were being attacked over another paper's story... 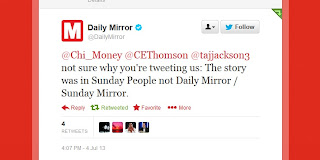 ...Which might have been a valid point, were it not for the fact that the original story appeared on the Mirror's website, as did another story the following day, which repeated all of the inaccurate information.
Posted by Charles Thomson at 23:08