"Judges described Charles Thomson as having a good writing style and being 'a credit to the newsroom', but also a livewire who at times must 'turn his editor's hair white'." 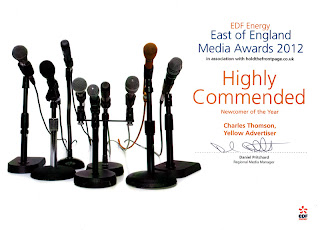 I was honoured this month to receive a 'Highly Commended' award in the 'Newcomer of the Year' category at the EDF Regional Media Awards. I was handed the prize for a portfolio of stories produced within the last year.

The collection included a series of interviews with Lord Hanningfield, detailing his life after being convicted and jailed for expenses fraud in 2011. I was also nominated for a gonzo piece detailing my thwarted attempt to interview former TV star Michael Barrymore, who instead turned the tables on me, pulled me on-air and grilled me on the radio.

The judges nominated me also for two court stories - one in which I single-handedly challenged and overturned a ruling which blocked the identification of a criminal who downloaded over 100,000 child sex abuse images, and another in which I uncovered a child abuse cover-up by the Jehovah's Witness church.

I love my job and to receive this commendation was simply the cherry on top of a fantastic year.
Posted by Charles Thomson at 23:37