How I Stumbled Upon A Religious Sex Abuse Scandal

Last Wednesday afternoon I headed to court, as I often do, to sit in on an afternoon sentencing hearing. I had checked the court listings that morning - which I do every day - and spotted a name which had been on the lists a lot in recent months. Barry Snow. I had some vague awareness that it was a sex abuse case but couldn't remember the details, so I rang the Crown Prosecution Service (CPS) press office for the charges.

Nine counts of indecent assault, I was told. 'On children?' I asked. The press officer said they didn't think they were supposed to say either way. That was a nonsense, of course - all charges are public information - but the press officer's reticence told me everything I needed to know.

It was lucky that I headed to court that day, because the prosecution of Barry Snow highlighted an appalling oversight in the British legal system - and I was the only journalist in court to hear about it.

In the late 1970s, Barry Snow - a member of the Jehovah's Witness church - repeatedly molested a girl under the age of 10. When the girl's parents, who had connections to the religion, discovered the abuse, they reported Snow to the church as Jehovah's Witnesses are often encouraged to do. When the church confronted Barry Snow, he confessed everything.

The church, now aware that multiple crimes had been committed against a child, did not report these crimes to the police. Instead, the church dealt with Barry Snow internally. It gave him counseling and imposed 'sanctions' on him - although nobody remembers what they were. The sanctions didn't work. Roughly three years later, Barry Snow repeatedly molested another girl. His abuse this time around was more invasive than in the previous case. He had escalated.

Snow's crimes only came to police attention in recent years when his two victims found out about each other's abuse through mutual acquaintances and decided to report him. As a result of Snow's prosecution, his first victim's report to the church in the late 1970s was made public. Summing up before he sentenced Barry Snow, Judge Jonathan Black criticised the church's handling of the allegations. I wondered whether anybody would be prosecuted over their failure to report the abuse at the time.

This led me to a shocking discovery. Under UK law, there is no legal obligation for any organisation - be it a school, a church or a football club - to report child abuse to police. If a teacher witnesses your child being molested by another teacher and fails to report the discovery, they may be sacked but they cannot be prosecuted. Or, as child abuse campaigner Tom Perry put it to me, when your child attends any sort of school, club or church and a staff member sees them being abused, your child has no statutory right to have that abuse reported to anybody.

Campaigners, charities and lawyers are fighting to introduce a law which criminalises the willful withholding of information about child abuse, but some told me that the government simply refuses to listen to them - perhaps too embarrassed to acknowledge that the law has not existed for all these years. Most people assume - as I assumed - that such a law would exist. It seems like a no-brainer.

My reports on Barry Snow and how Britain's legal system is failing child sex abuse victims have sparked some debate. Articles on our website very rarely generate comments, with most contributors favouring our Letters Page, but these stories have attracted international attention. Here they are as they appeared in the newspaper, splashed across the front page and continued inside. 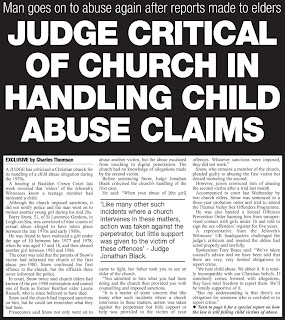 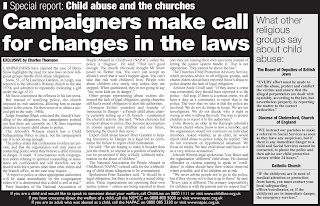 To join the debate, visit the online versions here and here.
Posted by Charles Thomson at 23:42