On Monday I was dispatched to interview Michael Barrymore, who was in town to record a guest slot for the local radio station. The station owners had told me Barrymore had agreed to be interviewed, but on the condition that his past not be discussed.

DNA ruled Barrymore out of the assault but the scandal ruined his career. He has spent more than ten years now trying to put the incident behind him. In 2006 he almost mounted a successful comeback by appearing on Celebrity Big Brother. The public seemed to embrace him - he came second on public votes - but while many of the viewers at home were willing to let go of the past, the media wasn't. Everywhere Barrymore goes, he is followed by unpleasant tabloid innuendo - something most broadcasters are unwilling to associate themselves with.

What happened to Stuart Lubbock will probably never be known and opinion on Barrymore will forever be divided by the incident. Some people believe he is holding back information, protecting somebody - but I didn't walk into the interview hoping to interrogate him about it. Many have tried and they've all failed to produce the career-making smoking gun they're looking for. If anything, the more people probe the incident, the more questions seem to arise - so grilling him about his past would probably have been somewhat of a wild goose chase.

I was interested in Barrymore's life now. Is he following the Leveson inquiry? What does he make of it? Does he feel his treatment has been symptomatic of the widespread media misbehaviour which is now being uncovered on a weekly basis? How do people react to him now? How does he deal with people's hostility? These were just some of the questions I'd have liked to put to him.

Alas, when I arrived at the radio studio, Barrymore denied having ever agreed to give me an interview in the first place - something I never quite got to the bottom of - but he did agree to let me sit in on the radio recording.

Halfway through the show, during a music break, he invited me to sit next to him. Then, once recording resumed, he began grilling me about my job. He made a running joke about having turned the tables to interview me. Our interaction dominated the second half of the show.

My take on the encounter has been published in my regional newspaper (see below). I will post details on how to tune into the show as I find them out. It'll be interesting to see how much they have to cut out. I have an unedited copy and it's a great listen. 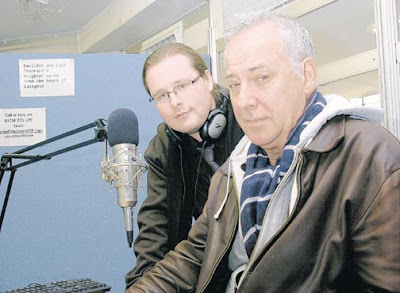