I'm about to post an update on my Jermaine Jackson interview, but before I do I feel I should address an issue which recently came to my attention.

I have long been the subject of nasty rumours and hate campaigns by a collection of obsessive wingnuts at a website called Topix. I first became aware of them when somebody sent me a link to a thread where they were accusing Deborah Ffrench and I of being the same person. Many of them continue to allege that we are the same person, even though we've made several radio appearances together. Some have gone further and claimed that I don't even exist. This is despite the fact that I've appeared on TV. At one point they even emailed the Huffington Post en mass to inform the staff that they'd been duped and I didn't exist.

Impersonation is a problem I've had to contend with a few times in the last few years too. It started out with people posting foul-mouthed gibberish underneath articles on websites like TMZ, signing them with my name. Then things moved up a notch. Somebody set up an email address closely resembling mine and used it to create a website calling Michael Jackson a child molester. They started emailing fans, claiming to be me.

Now things have taken a more sinister turn. In a similar incident, somebody has once again set up an email address closely resembling mine. This time, though, they've used it to join a public group for people who like to post pictures of young boys. Then they've sent out public messages asking the other members to post 'more uplifting' shots.

It seems pretty clear to me that the culprit is one of my obsessive detractors over at Topix, given that this is, rather conveniently, the only place anyone has ever discovered the emails. Moreover, in order to search for an email address, one must enter it into a search engine exactly. Given that this email is not mine, and there has never previously been any suggestion that it is mine, there is no reason for anybody to be searching for it.

In order to successfully turn up the public messages sent from that email address, the person who posted those messages on Topix must have searched for that email address in its exact form. The only reason they'd be doing that is if they already knew it existed. The only reason they would know that is if they were either directly involved in its creation or knew somebody who was.

To add insult to injury, the discussion also includes comments from Topix users about how because I am gay, I must be attracted to little boys. That tells you pretty much all you need to know about the mindset of those involved, but that is of little comfort, knowing that such despicable, heinous accusations exist about oneself on the internet. Some users have even posted pictures of me, saying that I look like somebody who would abuse children.

I can't be sure of why I attract such ire from Topix users. Setting up a phoney email address, joining a paedo-sympathisers' group, sending out public messages and then posting them on the internet claiming I'm the sender is a pretty elaborate ploy. A lot of time and effort must have gone into it. Why go to such lengths over me?

My only guess is that it's because they a) find me threatening and b) have nothing else to come at me with. My work on Michael Jackson is deeply researched and rigorously fact-checked, then published by legitimate, international news outlets. This seems to really cheese off the small but obsessive clique of Jackson haters who lurk at Topix. So much so that they appear to have impersonated me on several occasions now in various attempts to undermine my work.

Their two-pronged tactic has been to portray me as either an obsessive fan or a paedophile sympathiser. Neither holds any weight.

As far as being 'obsessive', the Jermaine Jackson interview I'm about to post will be my first Michael Jackson related article in about a year. The Topix crew, meanwhile, are on that snarky little forum every single day of their lives, ranting about Jackson and his supporters. What's that old saying about people who live in glass houses?

As for being a paedophile sympathiser, the claim is outrageous. I spent a significant chunk of last year sitting in a courthouse, working as a trial reporter for regional and national newspapers. My two biggest stories were about paedophiles who were given absurdly lenient sentences. I even posted one of them on this blog: 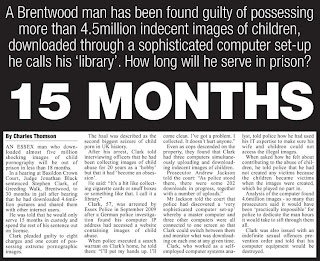 
The Topix users seem to equate belief in innocence with sympathy for the guilty. By their logic - if you can call it that - the twelve jurors who sat through all of the evidence and testimony in Jackson's trial and reached unanimous 'Not Guilty' verdicts on all charges must also be paedophile sympathisers - a notion which has no basis in reality, given that most of the jurors were parents or grandparents.

Pulitzer-winning journalist Dorothy Rabinowitz once wrote a book all about people who were falsely accused of child molestation and faced similar treatment. In the epilogue of No Crueler Tyrannies, she wrote that child abuse was such an emotive subject that people became infuriated by anybody campaigning on behalf of the wrongly accused. Their belief was that vindicating the innocent would lead to lighter treatment of the guilty, or demonstrated a lack of sympathy for real child abuse victims.

Rabinowitz wrote: "I have to note the query often raised in the course of interviews about these cases. Did I recognize that child sex abuse existed and was a serious problem? reporters would ask. A strange question, that. The discussion of no other crime would require such a disclaimer. Journalists who have written about false murder charges are seldom asked to provide reassurances that they know murder is a bad thing, and it really happens."
Indeed, I have never been criticised for my articles about questionable murder charges, like those of Kenny Waters or Troy Davis. I have never been branded a murderer-sympathiser, or had my photo posted on forums by people claiming I look like I would enjoy murdering people.
Perhaps the posters over at Topix just have an affinity for children who make false accusations. It would make sense, given that most of the Topix posters appear themselves to be children who sit around all day making false accusations.

Ultimately, they've only exposed themselves. To post pictures of somebody, unprovoked, and say they look like a child molester - and to go so far as to publicly smear someone with fake emails portraying them as a paedophile - is beyond despicable. It is an evil, spiteful and wholly indefensible act. Those responsible have outed themselves as pure scum. It is no wonder they're all too cowardly to put their names to any of their disgusting posts. They'd be spat on in the street.

Arguably more despicable than the posters, though, are the owners of Topix, who refuse to remove smears of this kind from the website unless the victim is rich enough to hire a lawyer. Where does freedom of speech end and slander begin? I would submit that the line has been crossed considerably when you start baselessly accusing somebody of paedophilia.

The message of Topix's owners: 'If you're rich, we'll do whatever you like, but if not, we're going to provide imbeciles with a forum to publicly paint you as a paedophile.' The message of its users: 'Say anything we don't like on the internet, and we'll use the forum Topix is providing to its fullest extent.'

What can I say? They deserve each other.

Posted by Charles Thomson at 21:35