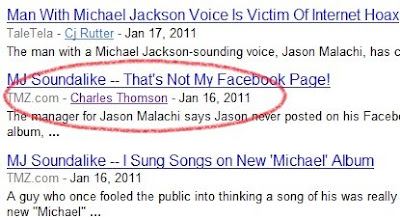 Fans suggested that this was some sort of petty retaliation on TMZ's part after I wrote a lengthy rebuttal last week to one of their articles. On Thursday 13th January, TMZ ran a story titled 'MJ Pushed Dr. To Improperly Give Son Anesthesia', accusing Michael Jackson of subjecting his youngest son to 'risky' medical treatment. I was contacted by Sawf News, with whom I have a rolling contract, who asked me to write some sort of commentary on the story.

After obtaining legal documents relating to the case, consulting official medical guidelines and putting TMZ's coverage under the microscope, I found that it was riddled with half-truths, misleading language and pure sensationalism. My resulting article, 'Making a Mountain out of a Molar: How TMZ turned a dental appointment into a global news story', generated huge traffic for Sawf News and became the website's most commented article.

My rebuttal was published on Friday 14th January and the TMZ article with my by-line attached appeared on Google News just two days later, causing fans to speculate that this was somebody at TMZ's idea of a joke, or an attempt to turn my supporters against me by giving the appearance that I had joined TMZ's ranks less than 48 hours after scrutinizing their reporting.

As it turns out, this phantom by-line is linked to my Sawf News article, but not in the way that the fans thought. I consulted an internet expert this evening who told me that my being listed as the author of TMZ's article is a result of a weakness in Google's news aggregation system.

After I wrote my rebuttal, lots of fans took to posting it in its entirity in the comments section underneath all of TMZ's latest entries on Michael Jackson. When TMZ's article about Jason Malachi went online, they did the same thing.

According to the internet bod I consulted, when the Google news aggregation system hosts an article, it scans for a by-line. In the case of this article, there was no official by-line. However, further down the page somebody had posted my Sawf News article in the comments section, including the words 'by Charles Thomson'. The news aggregator will have scanned for a by-line, picked up mine from the comments section and consequently listed me on Google as the author of TMZ's article.

To my knowledge, there is nothing I can do about this. In my previous dealings with Google I have found them to have what I consider to be the worst user support system I have ever encountered.

I have attempted to contact Google on various occasions throughout the last year to deal with people using their email service to impersonate me and their blog service to publish damaging lies about me. Upon telephoning Google I was consistently met with an audio recording telling me that 'Google does not authorize customer services at this time', whatever that means.

Their online assistance service was no more helpful, consisting of a text-based Q&A system which sends users around in circles and an advice forum full of knowledgeable but unpaid users who, however technically able, are not capable of dealing with slander and/or impersonation. I suspect they'll be equally incapable of removing inaccurate by-lines from Google News.

So this is just a quick blog to let you know that I am not the author of TMZ's article and explain why Google seems to think that I am.

Posted by Charles Thomson at 18:22