As I mentioned in a blog entry earlier today, on Friday evening I was invited onto Blog Talk Radio to be interviewed about my reporting on Kelvin MacKenzie's recent diatribe against Michael Jackson's children on British TV.

During the half-hour interview a number of other subjects were covered, including the release of the new Michael Jackson album and the campaign waged against me this summer by conspiracy bloggers. The latter discussion appears to have provoked the ire of one such conspiracy blogger, whose latest entry is a frenzied rant about my appearance on the broadcast.

During the last five months or so I have become accustomed to seeing harebrained blog entries written about me and have mostly managed to abstain from responding to them, but this one caught my attention because the blogger in question - Bonnie Cox - told some pretty sizable porkies, including a couple about the content of her own blogs.

During my interview on Blog Talk Radio I discussed two of the accusations that Bonnie had made about me in the past few months; namely that I was involved in a plot with John Branca and that somebody had hired me to attack AEG.

Bizarrely, Cox took to her blog this weekend to deny ever making either of those accusations, apparently forgetting that the original accusations were still on her blog for anybody and everybody to read.

Here's Cox in her latest blog entry, denying that she ever accused me of being involved in a plot with John Branca:

And yet here she is the previous month, blatantly accusing me of being involved in a 'buddy-buddy three-some' with John Branca and Randy Taraborrelli, 'getting along on MJ's wallet, name, blood, sweat and tears': 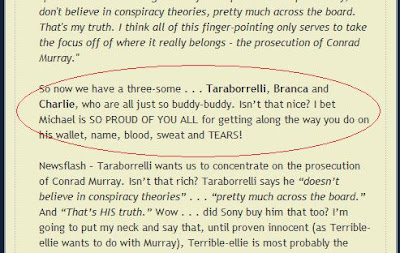 Back-pedal, or amnesia? You be the judge.

Similarly, here's Bonnie in her latest entry claiming that she didn't accuse me of being hired to attack AEG:

No Bonnie, it wasn't Muzik, it was you. Look:

During my discussion with the hosts about conspiracy bloggers and their methods, I mentioned how these bloggers totally dismiss any evidence which contradicts their pre-determined conclusions. I used the example of bloggers who constantly claim that I didn't write positively about Michael Jackson until after he died, even though a fifteen second visit to my website will show that I've been writing pro-Jackson articles for several years.

Did Bonnie take this opportunity to 'fess up to her deception? No. She logged straight into her blog and repeated the exact claim that I'd just debunked:

Her comment is a lie. Simple as that. The first time I was ever paid for a story about Michael Jackson was in March 2009 when I was contacted by a member of MJ's camp and specifically asked to leak information on his trip to London, in order to create hype around his impending concert announcement. Prior to that my only work on Michael Jackson was largely very sympathetic and was written pro bono, such as my 2008 interview with Aphrodite Jones about her book 'Michael Jackson Conspiracy'.

Any claim that I was paid for anything Jackson-related before March 2009 is a lie and any claim that I didn't support Jackson before he died is also a lie.

In her new blog entry, Bonnie once more utilises the exact tactic that I described in my radio interview, telling her readers a half-truth and filling in the gaps with pure fantasy. She mentions my 2007 article about the album 'Thriller 25' and claims that it is proof of a pre-existing relationship between myself and Sony:

Firstly, Bonnie is a liar. I did not interview Sony's 'marketing head honcho'. I interviewed a member of Sony's catalogue release department marketing team. On top of this outright lie, she omits important information with the specific intention of misrepresenting my interaction with Sony.

What Bonnie doesn't tell you is that I was dispatched to Sony HQ in December 2007 by a fansite. Like many journalism students, I used to write for free for fansites in order to bolster my portfolio of published work and gain vital interviewing/writing experience.

In other words - as a 19 year old journalism student I interviewed a member of Sony's catalogue release marketing team for a Michael Jackson fansite. This, according to Bonnie, proves that I am a dastardly co-conspirator in an evil Sony plot to murder Michael Jackson.

The other thing Bonnie doesn't tell you is that my review of 'Thriller 25' was negative, not positive, which totally negates any implication that I was somehow acting as an agent of the record company who put it out. I described one of the remixes on the set as sounding like 'a hobo bludgeoning a dwarf with a sack full of windchimes'. In fact, the review was so negative that Sony complained about me in writing and issued me with a lifelong ban from their catalogue release department.

The latest blog from Bonnie is, essentially, just more of the usual; another gigantic dose of paranoia with a generous sprinkling of deception. But this time she has been caught out in a series of undeniable lies. She denied writing certain comments about me when those comments were still on her blog in black and white for all to see. In doing so, she has demonstrated just how changeable and unreliable she really is.

In the past it has been pointless to respond to Bonnie's claims because there has been no way to refute them. How can you prove that you haven't done something? If you've been to the Grand Canyon and someone accuses you of lying, you can pull out a photograph. If you haven't been to the Grand Canyon and somebody claims that you have - how can you prove they're lying?

What differentiates Bonnie's latest blog from her previous offerings is that this time she's trapped herself in her own web of deceit. Here, in black and white, are Bonnie's lies for all to see. On one day she'll claim that I'm in cahoots with Branca, on another she'll deny ever saying any such thing. In one entry she'll say I've been hired to attack AEG, in another she'll claim that it wasn't her and that it must have been a different blogger.

Her reader numbers have dwindled significantly since the summer after she embarked on a number of ill-advised campaigns against everybody from make-up artist Karen Faye to a variety of innocent fans. But after this latest embarrassment, it'll be a wonder if she has any readers left at all by the end of the year.

Here's an excerpt from the Blog Talk Radio discussion that caused the controversy:

Posted by Charles Thomson at 18:17