'Take Me Out' Contestants are Actors, Models and Dancers

Ever wondered why the girls on ITV1 Blind Date-a-like 'Take Me Out' are so quick to turn their lights off? Their motivation is sometimes unfathomable. 'We interviewed Simon's mum' says Paddy McGuinness - and four lights go out. Why? Because he has a mother?! What is going on here?

I think I may have cracked it.

A shocking number of the contestants on Take Me Out are actually entertainment industry professionals; actors, singers, dancers and models. So their compulsive light switching is apparently nothing to do with their compatibility with each potential suitor, and everything to do with keeping their mugs on the telly for as long as possible.

Roz is an 'experienced video model and dancer'. Here's her StarNow profile. Caroline, another model/actress, is also a StarNow client. So is Louisa. And Maria.

Elisha is registered to Solomon Artistes casting agency (you'll have to hit F3 and type her name in).

Siobhan's facebook states, simply, 'I'm going to be a star'.

According to Wales Online, Charlene is a model, while the Accrington Observer reveals that the show's infamous twins are budding actresses.

Georgee is a gigging singer/songwriter. Tandie is a 'singer, songwriter, actress and dancer'. Laura's myspace page lists her as a singer and actress and reveals that she's appeared in 'Skins'.

Meanwhile, this facebook page reveals that Rihanna appeared under the name Taniesha in a film called 'One Day'. 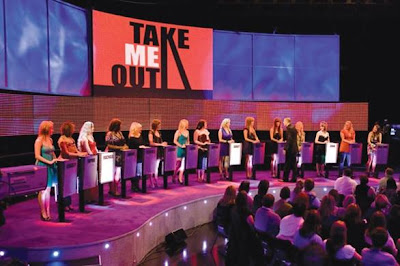 But it's not just the girls who are at it. A hefty number of the boys also seem to have ulterior motives.

Scottish hunk Tony Pang said he was a humble waiter, but here's his StarNow profile touting him as an actor and model. He's also the cover boy for PhD Nutrition, whatever that may be.

Tom Chilton has modelled for Cosmopolitan.

Adam Fothergill turns out to be a professional singer represented by Talent Lounge (here he is on the Talent Lounge YouTube page).

Perhaps most bizarrely, one of the batchelors in episode two was Alan Whitehead, former member of 60s pop band Marmalade, who had a British number one with a cover of Obla Di, Obla Da.

So just how real is 'Take Me Out'? At least five of the contestants are represented by the same talent agency and upwards of 15 others are professional actors, models, dancers or musicians.

And those are just the ones I've managed to track down in an hour-long research window.
Posted by Charles Thomson at 12:37