For a brief moment during tonight's X Factor final, Joe McElderry's victory seemed to be in question. Before Olly Murs performed the winner's single, Simon Cowell introduced him to the stage with a knowing smile. "Singing for what could be his last time on the X Factor, although I've got a feeling it won't be," he beamed, "Olly Murs."

I wondered: 'Does he know something we don't?'

He didn't. Olly promptly murdered the winner's song - 'The Climb' - although Cowell, who was apparently experiencing the performance through a haze of mushroom-induced hallucination, proceeded to heap praise upon it anyway.

Moments later Joe McElderry took the stage and made Olly's performance look like amateur hour, giving several of the night's ropey guest performers a lesson in vocal dexterity while he was at it.

With his soaring vocals and his cheery disposition, Joe had to win this year's competition. The show was a one horse race from beginning to end, McElderry being the only stand-out vocalist of the series, easily outshining the competition every week. That he found himself in the final with a wobbly-legged Austin Drage impersonator was indicative of this year's talent drought. Even the real Austin Drage didn't make it past week four.

Newly released figures reveal that Joe ranked highly in the phone polls every week and won the last five shows of the series by a large majority, eventually beating Olly in the live final by a margin of almost 25%.

But already McElderry has been the target of overwhelming cynicism and nasty abuse on various blogs and social networking websites, much of it laced with subtle homophobia; Joe "belongs in musical theatre." The winner's single "suits Joe better because it's a girls' song."

Olly is a geezer; a snappily dressed Essex boy with a couple of dance moves under his belt that might be passable on a drunken night out in Bas Vegas. With tabloid coverage of his serial womanising and frequent mention of his apparent football skills, he's become a hero to blokey blokes up and down the country.

Joe, by comparison, is young and a tad effeminate. A drama school student, Joe is self-confessedly bored by sports, prefers to hang around with girls and tends towards ballads. He has reportedly not had a girlfriend since his early teens and a friend today claimed that he "was teased for years about his sexuality." While the friend states that at the time Joe 'was adamant he wasn't gay', the friend never states outright that he's straight.

Olly's fanbase has seemingly come to view Joe as a sissy and apparently feels that its jack-the-lad hero has been robbed. Seems to me like just another case of pointless belly-aching. Perhaps if Olly's fans had picked up their phones and voted a couple of times each then he wouldn't have lost so spectacularly.

As for Joe's tendency towards ballads - that apparent fault only served to highlight how much more talented he really was than his competitor. While Olly chose to hide behind big productions - chasing girls around the stage to loud backing tracks which disguised his often breathless vocals - Joe wasn't reliant on gimmicks. Tonight his talent has been deservedly rewarded. 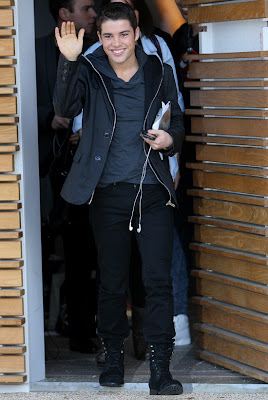 Elsewhere, the X Factor has been targeted in recent weeks by a series of vindictive campaigns to prevent this year's winner from taking the Christmas number one spot.

One such campaign, started on Facebook, aims to send Rage Against The Machine to the number one spot this year. Very christmassy. What exactly do they think they're striking a blow for? What will be achieved by sending an already filthy-rich act to the top of the charts? In what way is that combatting the supposed capitalist conspiracy they're campaigning against?

Cowell's label Syco is a branch of Sony. Sony owns Rage Against The Machine. So the money will end up in Sony's coffers either way.

The campaign is predicated on nothing more than snobbery; an assumption that anybody who enters the X Factor is a fame hungry mongrel and anybody who watches the show or buys the singles is a moron, incapable of independent thought. Such campaigns are mean-spirited and condescending.

The campaigns purport to be striking a blow against Simon Cowell's capitalist regime. However, in reality these campaigns will still favour the rich, lavishing cash upon already famous acts rather than sending it into the bank account of a young, working class lad whose only opportunity to achieve his dream is to enter a competition like the X Factor. That Christmas number one spot could change Joe McElderry's life, affording he and his family a better quality of life and opening doors that would otherwise have remained forever closed.

If the X Factor single were to lose a Christmas number one battle fair and square, that would be a different matter altogether. But these campaigns actively encourage people to buy music not because they want to listen to it, but for the specific purpose of crushing another person's dreams. Such campaigns are not only unfair, they are fundamentally spiteful.

Should any of these campaigns succeed in their aim, the impact on Cowell will be non-existent. He will still celebrate another carefree Christmas in his LA mansion. All they will achieve is to crush the spirit of a young boy who has spent much of this year working hard towards his lifelong dream.

Posted by Charles Thomson at 00:54